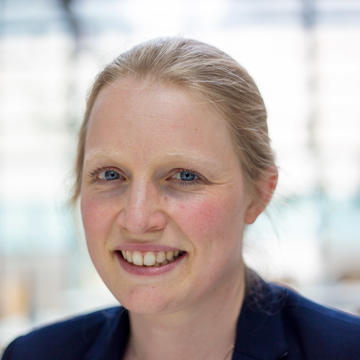 Nicky Farrer's multi-disciplinary research involves the development of novel metal-based compounds and drug delivery carriers that respond to external stimuli (photons, hadrons, ultrasound) for applications in medical imaging and therapy. She is particularly interested in delivering novel theranostic agents to the brain, with a specific focus on glioma.

Nicky Farrer is a Wellcome Trust Career Re-entry Fellow. She is a Faculty member of the Department of Chemistry, University of Oxford.

Nicky grew up in the seaside town of Paignton, Devon, UK. Her undergraduate degree in Natural Sciences at the University of Cambridge spanned physics, maths, chemistry and biochemistry, and she graduated with a 1st class degree in 2003, being awarded the Emeleus Prize for Distinction in Inorganic Chemistry and the Ida Freund Prize for First Class Work in Physical Science. She conducted her PhD work on the topic of electrospray-active phosphines and their coordination complexes, initially in Cambridge with Professor Brian Johnson, with an 18-month placement at the University of Victoria, Canada with Professor J. Scott McIndoe.

In 2007 she returned to the UK and took up a post-doctoral position with Professor Peter. J. Sadler at the University of Warwick, working in the field of medicinal inorganic chemistry. In 2011 she took a 3-year career break to have two sons. In 2014 she joined the Department of Chemistry at the University of Oxford as a Daphne Jackson Fellow, working part-time. In 2016 she became a Wellcome Trust Career Re-entry Fellow. In 2018 she was awarded the L’Oréal For Women in Science Award and SCG Innovation Fund Young Researcher Award and in 2019 she was included in the 2019 "Timewise Power 50" list.

A former ice hockey player, in her spare time Nicky enjoys playing the guitar, developing tasty new recipes, crafting and keeping chickens. She has an ambition to keep bees.