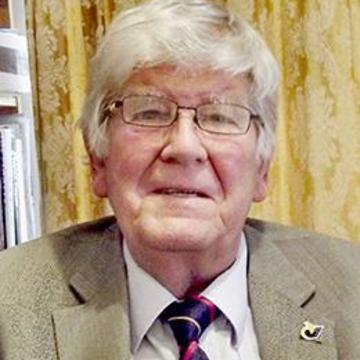 Professor Richard Wayne is Emeritus Student of Christ Church and was Professor of Chemistry in the Department from 1996 to 2006.

This research is concerned with the photochemistry and kinetics of reactions of atoms and small molecules, and the application of the results to the chemistry of planetary atmospheres. The work has many features of interest in fundamental physical chemistry, such as understanding the nature of radical–radical reactions, the factors controlling the pathways for atom recombination, and the reactivity of excited states. In addition, however, laboratory data provide the only sound basis for the interpretation of atmospheric behaviour and for the construction of diagnostic and prognostic models. Wherever possible, we collaborate with modelling groups to incorporate new data into numerical models.

In the lowest part of the Earth's atmosphere, the troposphere, hydroxyl (OH) radicals are formed during the day. These radicals attack a variety of compounds released naturally and as a result of Man's activities. The attack thus initiates the oxidation and degradation of a large number of species. Our group has long investigated the kinetics of these hydroxyl-radical reactions. One area of particular interest has been the reactions of OH with substances, such as the HCFCs, proposed as alternatives to the fully halogenated CFCs. The information obtained is essential in assessing the environmental impact of the substances. The degradation of halogenated species initiated by OH attack proceeds through a series of secondary steps. An area of interest to our research group is determining the pathways and kinetics of these degradation processes in order to better understand the consequences for the environment of the biogenic and anthropogenic release of such compounds.

It has emerged that oxidation can be initiated during the night as well as during the day. At night, the initial attack is by the nitrate radical (NO3). The radical can abstract hydrogen from saturated compounds and add across the double bonds of unsaturated ones. Over the years, we have made a speciality of the study of NO3, and investigated the kinetics and other aspects of the chemistry of the interactions of NO3 with a large variety of saturated and unsaturated compounds, atoms and radicals.

Biogenic species such as isoprene and the terpenes, which are emitted from trees and other vegetation, have been increasingly recognized as significant contributors to the organic chemicals present in the troposphere. One of our current research interests is a study of the interactions of NO3 with such compounds, the emphasis being on understanding both their atmospheric lifetimes and their probable atmospheric fates.

A most interesting discovery has been the presence of chlorine atoms in the lower atmosphere in marine environments. These atoms derive from reactions occurring on sea-salt particles suspended in the atmosphere. They are extremely reactive, and the rates of reaction with some organic species can exceed those of OH, despite Cl being present in much smaller concentration than OH. As a result, the oxidizing capacity of the marine boundary layer may be affected. Our research programme thus now includes an investigation of the reactions of Cl atoms with the various biogenic species and their oxidation products (such as methyl vinyl ketone and methacrolein), and also of the interactions with other compounds emitted to the marine boundary layer (such as alkyl iodides and selenides).

Other halogen atoms and their oxides may be important in tropospheric chemistry. We are making a special study of some key reactions of the IO radical (such as those with HO2 + IO, O + IO and IO + IO), in order that we can better assess the role of the species in the marine boundary layer, and possibly also in the free and upper troposphere.

The peroxy radicals, RO2, make up another group of radical species of interest to us. These radicals are key intermediates in the tropospheric oxidation steps just outlined. We have been making a particular study of the radical-radical interactions between NO3 and the RO2 species such as CH3O2, C2H5O2, and CH3CO.O2. An interesting feature of these processes is that they can act as a source of OH at night, which was hitherto unexpected.

Both OH and NO3 in the stratosphere ultimately have their origins in reactions of ozone. But the oxidation processes initiated by OH and NO3 also constitute sources of O3. It is very important to understand the oxidizing capacity of the atmosphere, because the oxidation processes 'cleanse' the atmosphere. On the other hand, ozone is a serious tropospheric pollutant, and it is one of the key components of photochemical smog. An understanding of the basic chemistry described in the preceding paragraphs contributes to providing a rational basis for the establishment of pollution control strategies. Oxidation of constituents such as NO2 and SO2 can lead to another form of pollution, acid deposition. One source of HNO3, for example, is the abstraction of H from organic species by NO3, so that there is a further motivation for studying the reactions of NO3 in the laboratory.

Most of the ozone in the Earth's atmosphere lies in the stratosphere, the layer above the troposphere. This ozone is of vital importance to life, because it shields the surface from short wavelength ultraviolet radiation. The processes controlling the concentration of ozone in the stratosphere are now well established, and catalytic cyclic loss reactions balance the production steps. Several catalysts are known, species such as OH, HO2, NO, NO2, NO3, Cl, ClO, Br, BrO being of particular importance. Concern arises that Man's release of compounds that are not degraded in the troposphere (the CFCs are prime examples) may find their way to the stratosphere and there lead to excess ozone depletion. Our research group has made an intensive study of ozone photochemistry for more than thirty years. We are currently interested in two main aspects. The first is the possible role of 'new' catalytic species. Examples include the radical CF3O (derived from alternatives to the CFCs containing the CF3 group) and iodine compounds (such as I and IO). Secondly, we are especially interested in the BrO radical, because it is an especially active catalyst for ozone destruction. Specific examples of reactions that we are studying are its interaction with the peroxy radicals HO2 and CH3O2.These radical–radical reactions require experimental study, particularly at low temperatures.

Several electronically and vibrationally excited species emit radiation from the stratosphere and the mesosphere of the Earth's atmosphere. The emission makes up the 'airglow'. Laboratory study of the excitation and deactivation processes is needed to interpret the atmospheric observations such as the nature of the emitting species, the intensities of different bands, and the altitudes from which emission originates.

As more 'hard' experimental data have become available about the other planets, we have started to investigate the photochemistry of their atmospheres. Excited oxygen contributions to the airglow of both Mars and Venus are topics that currently concern us.