The SCG-Oxford Centre of Excellence

The SCG-Oxford Centre of Excellence in Chemistry

The SCG-Oxford Centre of Excellence for Chemistry (CoE) is a unique collaboration between the University of Oxford and SCG - one of the largest integrated conglomerates in Thailand and a key industry leader in the Asia-Pacific region. The mission of the CoE is to assist SCG in becoming less reliant on non-proprietary technologies and move into higher value products, whilst forging more synergic links with industry.

Members of the SCG-Oxford Centre of Excellence in Chemistry

Established in 2012 and led by Professor Dermot O’Hare, the CoE’s main focus is on research and development in the area of nanomaterials and catalysis. Since its inception the CoE at Oxford has included a varied team of 34 people, including 11 professors, a deputy director, 3 early career fellows, 11 PDRAs and 7 PhD students, who all contribute to the success of the collaboration. At SCG Chemicals, from the President to industrial researchers, 25 people are directly involved in producing academic and industrial relevant chemistry. 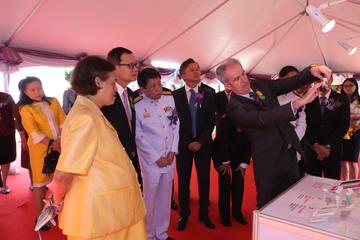 The current value of funds committed by SCG to the CoE is now over £15 million. Since the initial collaboration, 50 projects have been established that include new, more effective generations of metallocene and pentalene catalysts for specialty grades (higher value added) of polyolefins, as well as a new class of dispersible, ultra-high surface area layered double hydroxides as a nano-additive in the plastics industry. They are also collaborating on developing new bespoke functional materials as catalysts for CO2 conversion and alkane activation, in addition to functional coatings and sorbents. Every year there are also ten projects under the SCG Innovation Fund (SIF) where sponsorship is offered on an initial short-term basis to see whether ideas are viable for longer-term research and sponsorship.

Find out more at the SCG-Oxford Centre of Excellence website.