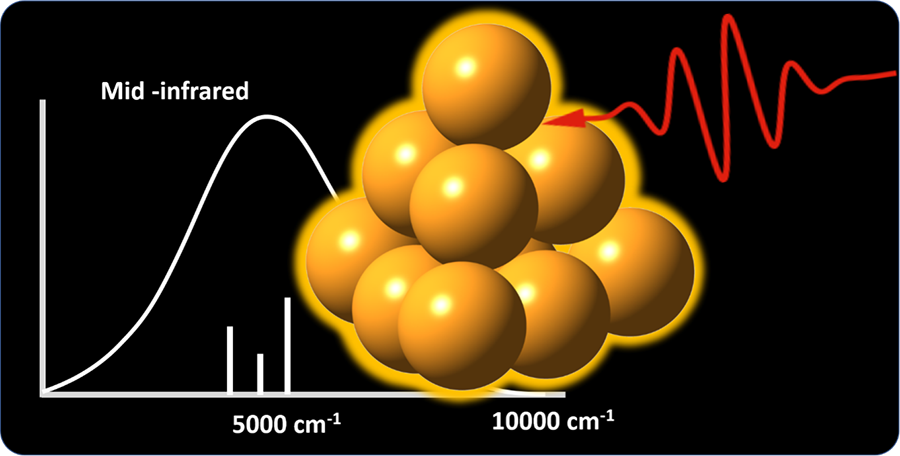 Infrared spectroscopy probes molecular vibrations, electronic transitions are in the ultraviolet or visible region, or so the textbooks tell us. However, in a highlighted article in this week’s Physical Review Letters scientists from the University of Oxford and the Fritz-Haber Institut  in Berlin show that a cluster of just 10 gold atoms, Au10+, absorbs strongly in the mid infrared through a highly unusual electronic excitation. This effect was then harnessed to selectively break strong chemical bonds in small molecules adsorbed on the cluster, opening the door to novel chemistry.

The group describes experiments performed in Dr André Fielicke’s laboratory at the Department of Molecular Physics at the FHI, Berlin, in which gold clusters are generated by laser ablation and entrained in a molecular beam. An inert “messenger atom” of argon is weakly adsorbed on the cluster surface before they are subjected to intense radiation from an infrared free electron laser. In what is known as action spectroscopy, the argon atom is lost when photons are absorbed by the cluster.

The unusual absorption band in the near tetrahedral Au10+ cluster was observed initially by chance during studies designed to characterise molecular activation at metal clusters. Prof Stuart Mackenzie, who leads the Oxford group @GroupMackenzie says, “This is a classic case of researchers looking for one thing and finding something altogether more interesting elsewhere in their data. In this case, Alice Green did what every good graduate student should do and set her mind on understanding it”.

The electronic structure of gold atomic clusters is often descried by jellium (or uniform electron gas) models in which outer electrons occupy well-defined shells rather like in isolated atoms. These usually have large energy gaps and transitions between them are restricted by selection rules. However, Dr Green, now a postdoctoral researcher, showed that the situation is more complex in the Au10+. It is an open-shell (free radical) cluster with the unpaired electron in a diffuse outer shell. This, and the distorted tetrahedral structure, leads both to a splitting of the electronic energy levels and a relaxation of the selection rules. The net effect is a strong, broad infrared absorption which appears unique amongst small gold clusters.

The researchers also studied the same gold clusters with small molecules adsorbed and found that the same feature is preserved. Moreover, they showed that absorption in this band drives breaking of strong chemical bonds in OCS molecules adsorbed on the Au10+ cluster leading to the prospect of interesting chemistry.

This work is the latest in a long series of collaborative publications between the Oxford and FHI Berlin groups.

Stuart Mackenzie is Professor of Chemistry at the University of Oxford.