The outstanding work of Oxford chemists has been recognised in this year's prestigious Royal Society of Chemistry awards, announced today.

The awards recognise more than 80 individuals and teams for their exceptional achievements in advancing the chemical sciences through their work in everything from education and research, to innovation, policy and volunteering.

The Royal Society of Chemistry is committed to supporting and improving inclusion and diversity in the chemical sciences, and this extends to their prizes and awards programme.

Professor Ed Anderson has been named the winner of the Royal Society of Chemistry’s Bader Award for his creative contributions to organic synthesis and synthetic methodology. Ed's work involves creating molecules with function, and creating new ways to make them more efficiently and selectively for synthesis as antiparasitic agents, antibiotics and anticancer molecules. His research team are also developing new chemical reactions that use metals as catalysts, such as the synthesis of small cage-like molecules for use as novel building blocks in drug design and the exploration of reactivity of unusual alkynes. On receiving the Bader award, as well as a cash prize of £2000 and a medal, Ed said:

“I was honoured to receive this award, and also delighted to have this recognition of the hard work of the many students and postdocs in my group who have contributed to our research.” 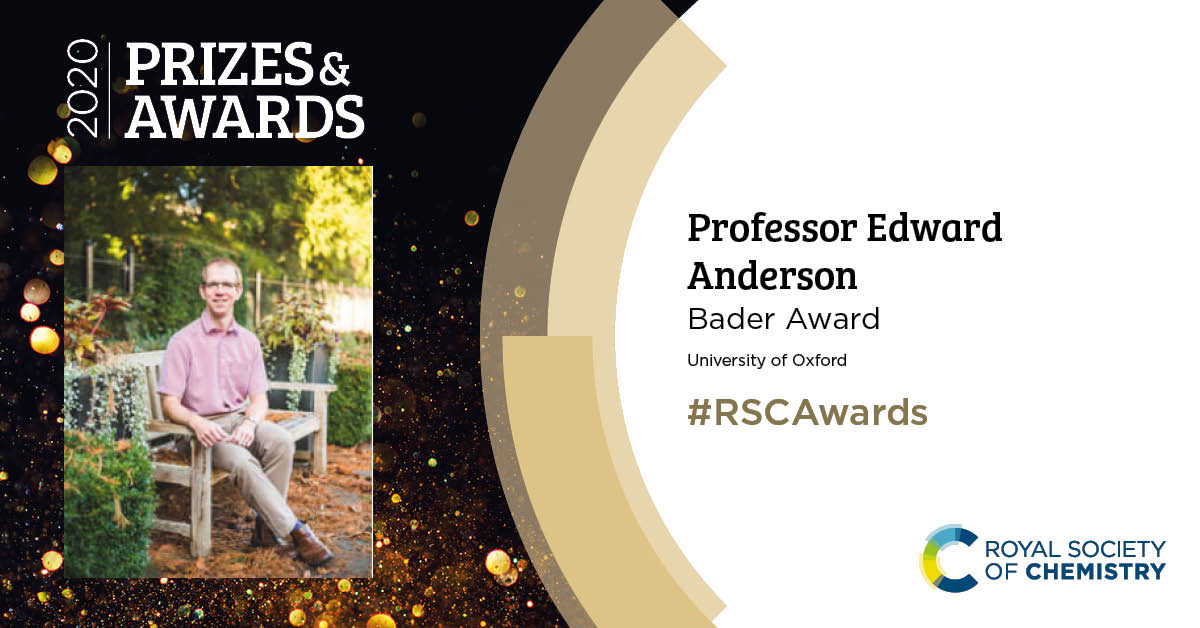 Professor Andrew Baldwin has been named the winner of the Royal Society of Chemistry’s Norman Heatley Award for his development and application of chemical methods for understanding the biology of membraneless organelles. Andrew's work focuses on large protein assemblies, or ‘aggregates’, whereby one of the aggregates is linked to disease and the other dictates normal cellular function. Both neurodegenerative disorders and dementias are associated with proteins aggregating and forming ‘amyloid fibrils’ in the brain, with Andrew's research group studying the behaviour of membraneless organelles – protein aggregates that form in cells at different times to carry out a wide range of biochemical duties. On receiving the Norman Heatley award, Andrew said:

“I am very honoured to receive this award. The credit for this work lies substantially with the group members and collaborators and I am very grateful to have worked with these tremendous people.” 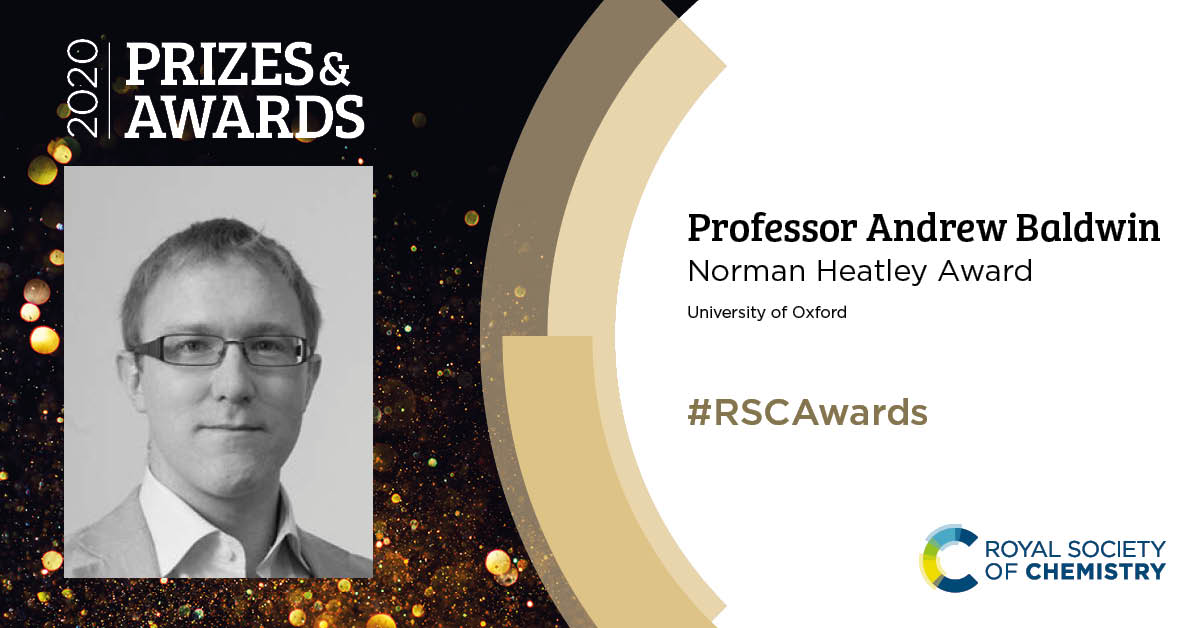 Professor Vernon Gibson of the University of Manchester, Imperial College London, and MPLS Visiting Professor of Chemistry at Oxford, has been named the winner of the Royal Society of Chemistry’s Lord Lewis Prize.

Professor Gibson won the award for his seminal contributions to fundamental and applied inorganic chemistry, and for critical work in policy setting at the interface of academia with industry and government. Along with his academic work, Professor Gibson has worked closely with industry, becoming Chief Scientist at BP and Chief Scientific Adviser at the Ministry of Defence. In recognition of his achievements, he also receives a £5,000 cash prize and a medal. On receiving the award, Professor Gibson said:

“I am deeply humbled and honoured to be chosen to receive the Lord Lewis Prize, and do so on behalf of the many talented students, postdocs and colleagues with whom I’ve been privileged to share a wonderful scientific journey."

"Not only was Jack (Lord) Lewis one of the most innovative and influential scientists of his generation, he also played a pivotal role in the implementation of science and education policy across academia, industry and government. With his outstanding scientific contributions  and innovative and critically-important policy work across industry and government, it is indeed  fitting that our distinguished colleague Vernon Gibson is the recipient of this most prestigious award. I am absolutely delighted that Vernon’s contributions have been recognized in this manner." 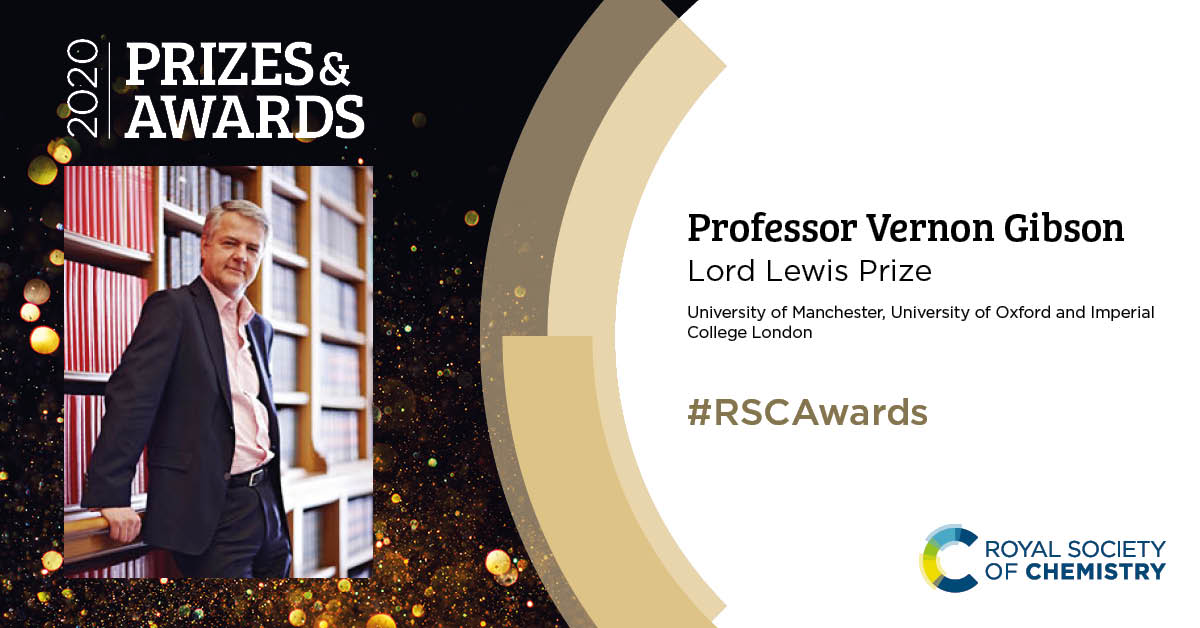 Professor Madhavi Krishnan has been named the winner of the Royal Society of Chemistry’s Corday-Morgan Prize for her invention of a ‘field free’ trap for confining and manipulating a single colloidal particle or molecule, enabling accurate and precise measurements of molecular charge in aqueous solution. Not only does this new measurement technique open up hitherto unforeseen avenues in fundamental science, but it also has the potential to impact the diagnosis and detection of disease states. Madhavi's research group is pioneering the use of an "electrostatic fluidic trap" to realise new experiments in the spatial control, manipulation, and measurement of nanoscale matter in solution, focusing on biological molecules such as proteins and DNA. On receiving the prize, Madhavi said:

“I feel extremely honoured at the decision of the Royal Society of Chemistry to recognise our work in the field of single molecule nanoscience, and am deeply grateful for the distinction. The award at this time is an extraordinary source of motivation and will propel us forward in our ongoing and future endeavours with even greater vigour.” 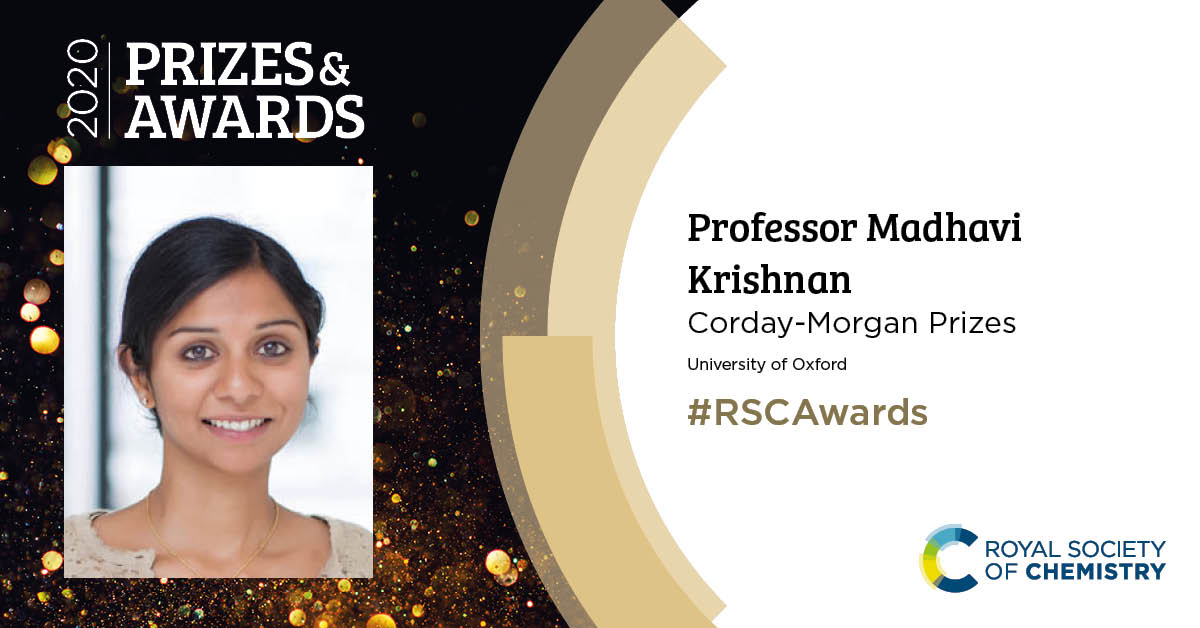 Professor Christiane Timmel has been named the winner of the Royal Society of Chemistry’s Tilden Prize for  her seminal contributions to the fields of Spin Chemistry and Electron Paramagnetic Resonance of spin polarised systems.

Christiane's work is focused on molecular structures that interact with magnetic fields to explain their physical, chemical and biological properties. Her primary focus has been centred on the study of the ‘radical pair mechanism’ – which is thought to  lie at the heart of birds’ use ‘magnetoreception’ to migrate at night. On receiving the award, Christiane said:

“The list of previous prize winners induced in me an overpowering feeling of humility which was swiftly joined by one of deep gratitude, of course to the Royal Society of Chemistry for awarding me this prize and my colleagues who nominated me for believing my work had justified this prestigious award.  Most importantly though, I cannot express my gratitude enough to my group, present and past, on whose behalf I accept this award. My students and postdocs have worked with unparalleled dedication and scientific talent, but above all, have always stood by me, in good times and bad. Together with my wonderful collaborators both in Oxford and further afield, it has been a group effort that has made this work possible and extremely enjoyable.” 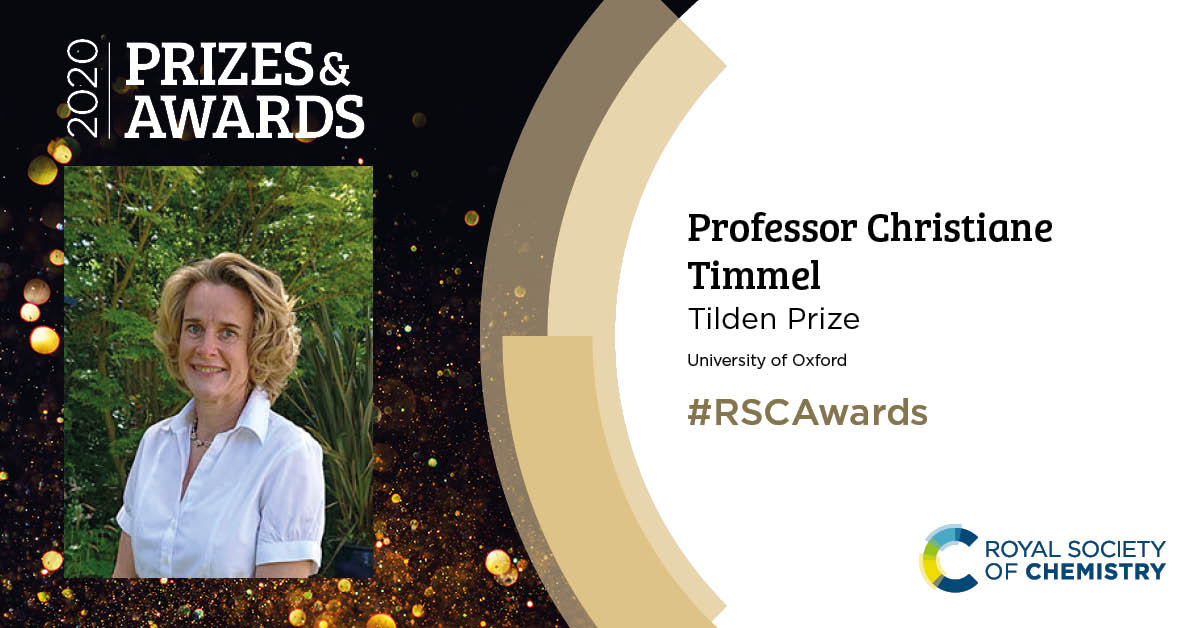