Developed in Oxford by Professor Kylie Vincent and Dr Holly Reeve, the HydRegen system (as you may have guessed, a portmanteau of hydrogen and regeneration) uses biocatalysis to produce cleaner chemicals highly selectively. HydRegen was recently awarded funding to ‘spin-out’ and as of December 2020 is an incorporated company, with R&D work set to begin in March 2021.

The HydRegen system uses multiple different enzymes combined with a cofactor, NADH, to carry out reductive hydrogenations, with excellent chemical selectivity. Hydrogenation reactions are a vital step in the synthesis of a variety of compounds, including pharmaceuticals and fragrance molecules. These reactions are typically done using chemical methods which rely on toxic and expensive metal catalysts, often require harsh conditions, and are not always as selective as using enzymes. Using redox biocatalysis as a replacement can be problematic as cofactors are so expensive – meaning that to use NADH, it needs to be constantly regenerated for the process to be economically viable. In industry this regeneration is often powered using glucose, however this results in carbon-based waste and a low atom economy. The HydRegen technology uses simple hydrogen gas (H2) combined with specialist enzymes to regenerate (or recharge) the NADH, meaning there is essentially no waste, 100% atom economy and as an additional benefit, product isolation is simplified. 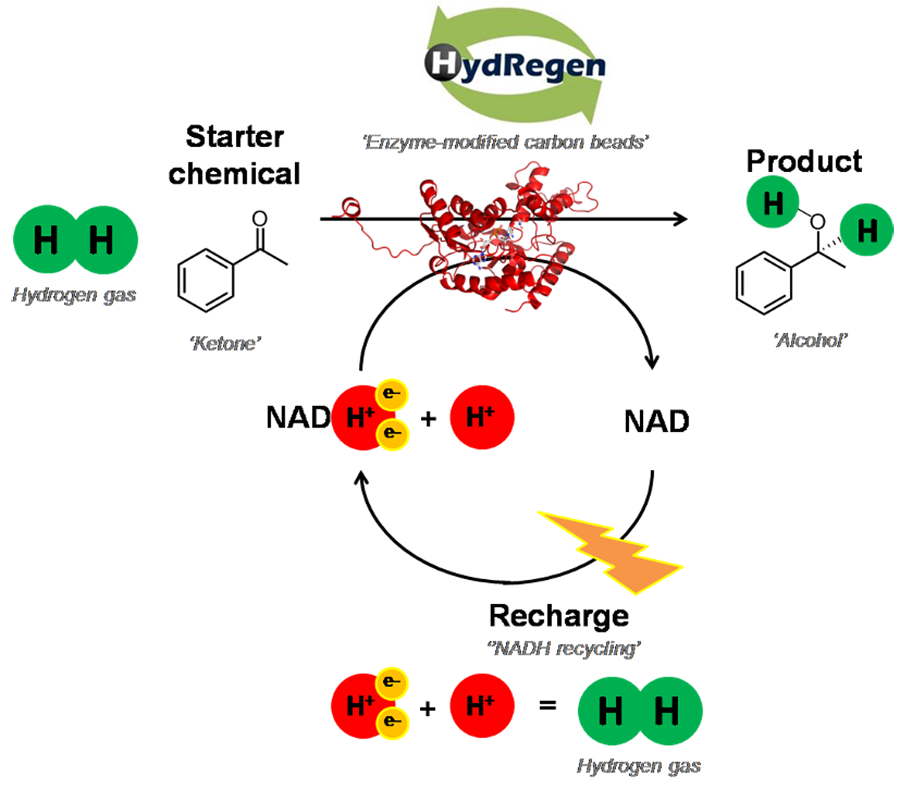 The HydRegen project has been in development for around ten years now and the concept has received multiple awards along the way. The technology was pioneered by Kylie Vincent and developed as part of Holly Reeve’s Part II and DPhil projects, which she completed in the Vincent Group. During this time, a pitch about the research was awarded the Royal Society of Chemistry Emerging Technology 2013 prize. Then, in 2016, a £2.9 Million IB Catalyst grant was awarded for development of the project, securing its future and allowing the team to expand. Holly continued working on the project, becoming Project Manager for the IB Catalyst grant, and is now CEO of the newly incorporated HydRegen Limited, as well as being listed as a co-founder alongside Kylie.

The HydRegen system works by employing three enzymes, immobilised on a carbon bead. One of these is an NADH dependent enzyme (see Figure 2 below, coloured red), which catalyses the desired reaction (typically a reduction in which two hydrogen atoms are added across a double bond) wherein the NADH will act as a selective hydride donor and end up in its oxidised form, as NAD+. The other two enzymes facilitate the recycling of the NAD+ back to its reduced form, NADH. There is a hydrogenase enzyme (coloured green) which splits hydrogen gas apart, ultimately forming protons and electrons. The resultant electrons are transferred via an iron-sulfur relay (essentially acting as a biological wire) within the hydrogenase to the carbon bead and, as the carbon bead can conduct, these electrons flow to the final enzyme to be mentioned: NAD+ Reductase (coloured blue). This NAD+ reductase uses the electrons fed to it plus a proton (helpfully formed by the hydrogenase too) to convert the ‘used’ NAD+ back to NADH. Thus, the cycle continues and, as the only inputs are the hydrogen gas and the desired reactant, there is theoretically no waste. The carbon beads, with their attached enzymes, can be removed from solution and used again. This allows for simple product separation and makes the beads simple to reuse and therefore more cost-effective.

One major development in the technology has been the translation of the technology into flow chemistry. Flow reactions are carried out by flowing reactants through a tube or pipe and, in this case, over the heterogeneous catalyst packed bed, allowing very efficient mixing. Flow hydrogenation chemistry has other advantages that make it ideal for industry: it can be safer as only a small volume of pressurised H2 gas is required at any one time,  it allows for easy automation and process control, and it permits high reaction productivities with small reactor footprints too.

As well as scale-up, one exciting area that is being explored using the HydRegen system is the selective addition of deuterium (2H or ‘D’). [4-2H]-NADH, a deuterated analogue of NADH, can be effectively recycled by the HydRegen system, using standard hydrogen gas but with D2O as a solvent. This allows the production of α-deuterium-labelled chiral molecules, with all the benefits of the HydRegen system – such as very low waste generation and very high selectivity. Deuterated compounds are useful for structural and kinetic studies but also, excitingly, are now being employed as pharmaceuticals in their own right. Deutetrabenazine, the first deuterodrug, was recently approved and numerous other deuterated drug molecules are currently in the pipeline.

Whether it is in creating fragrance molecules, synthesising new deuterated pharmaceuticals or a host of other important work, selective reductions are a key step in many chemical transformations. HydRegen offers a way to make these reactions cleaner, safer and more efficient.

Images created by Dr Holly Reeve and originally featured in an article written by her, about chemistry taking inspiration from nature, for the Oxford Sparks Website. The article features an animation that might be of interest to those keen to understand more about the HydRegen system.

About the fundamental science behind the technology

About the implementation of the system in flow