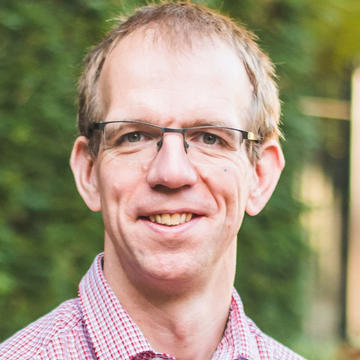 I grew up in Leicestershire and was the first in my family to go to University. I was actually an undergraduate at Oxford, and did my Part II with Harry Anderson in the early days of his group. I moved to Cambridge for my PhD, then to San Diego for postdoctoral work with Erik Sorensen at the Scripps Research Institute. Then it’s a bit of a path reversal – I went back to Cambridge as a Junior Research Fellow (almost 7 years as a postdoc in total!), and finally moved to Oxford in 2003 as an EPSRC Advanced Research Fellow. I applied to Oxford in part due to the opportunities and strength of the department in synthetic chemistry – and also as my wife and I were trying to coincide moves to independent positions!

A number of people have made a big impact on me, but I would have to pick out my PhD supervisor Prof Andy Holmes – someone who has supported me throughout my career, and who had so many interests in his research. I think that’s influenced the shape and direction of my own group. Prof Erik Sorensen was also a great supervisor in terms of how he really immersed himself in his research, mechanistic detail, and the history of the subject; all while allowing freedom to pursue ideas. And also Prof Ian Paterson – who I worked with for my second postdoc – and from whom I learned much about what is important in running a group. Not least that people who want to be involved with a group socially as well as academically make excellent group members, and create a lively working environment!

My group is interested in the synthesis of useful organic molecules (i.e. containing carbon, hydrogen and typically other non-metal elements), and the development of new organic chemical reactions. We often aim to use metal catalysts to promote reactions, which improve efficiency and enable us to carry out transformations under ‘greener’ conditions.

One project of current interest is the synthesis of natural occurring molecules (natural products) that have biological activity against neglected tropical diseases such as leishmaniasis and Chagas disease. We are making unnatural variants of these structures in the hope to understand and improve the source of bioactivity, and we collaborate with a number of other research groups to test these molecules and explore their biology. This project is exciting to me as we have an opportunity to benefit the lives of millions of people in developing countries who suffer from these potentially fatal diseases.

Another area that I find fascinating is the synthesis of small, cage-like molecules called ‘bicyclopentanes’ (aka ‘BCPs’), which we make from a molecule called ‘111-propellane’ – an amazing organic structure that contains two non-tetrahedral carbon atoms. BCPs are currently very popular in drug design as replacements for benzene rings, as they bring many pharmacological benefits. We are developing new, catalytic methods for the synthesis of BCPs, using the light from LEDs to activate catalysts, which then enable bond formations with 111-propellane. I am excited by this project because it not only has real-life applications in medicinal chemistry research (and I believe our methodologies can be genuinely useful in that context), but also because we are exploring fundamental theoretical questions about these unusual molecules, which we think could offer a new way to think about the reactivity of small rings in organic molecules.

Outside the lab I have many other interests! I enjoy training for triathlon sports – with an ambition to get back to competing again soon(ish)… I also play the piano – Beethoven sonatas are a particular favourite (or maybe challenge). I’ve had an allotment plot for the last five years or so, which is a great place to be in the spring and summer, and good for the veg too. I am active in our local community in Banbury, and am currently chair of Governors in our local primary school, which has been a rewarding and also humbling experience, as many children in our school are very disadvantaged.

I have two children (aged 9 and 11), and despite the above interests and commitments try to spend as much time with them as I can – I aim to get home in good time during the week, trains depending! My wife is an academic at Warwick University, which means it’s often challenging to juggle our timetables. I do need to spend a fair amount of time working in the weekday evenings to stay on top of everything and ensure I’m supporting my group as best I can – I think I usually manage to find the right balance!