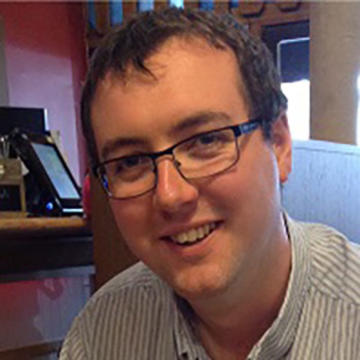 My research focuses on the development of new chemical tools for the study of biological systems. In particular, I am interested in the synthesis of novel emissive probes for use in fluorescence microscopy. My research combines synthesis with spectroscopy to study photochemistry and photophysics, as well as the development of microscopy techniques.

The resolution of conventional fluorescence microscopy is limited by the diffraction of light, to approximately half the wavelength of the light used to image the sample. Objects closer together than the diffraction limit cannot be distinguished from each other using standard techniques. For fluorescence microscopy (which uses visible light) this limits our resolution to around 200 nm. Unfortunately, most sub-cellular structures are smaller than this. A number of advanced techniques known as super-resolution microscopy (SRM) have been developed to overcome this limit. SRM techniques allow unprecedented spatial resolution in fluorescence microscopy, but most currently require long imaging times or high laser powers which are not ideal for imaging live biological samples. I am developing small molecule dyes for a technique known as RESOLFT, which will allow spatial enhancement with significantly lower laser powers. This work is carried out in collaboration with the group of Prof. Christian Eggeling at the MRC Weatherall Institute of Molecular Medicine.

RESOLFT (REversible Saturable OpticaL Fluorescent Transitions) microscopy uses fluorescent dyes which can be switched reversibly between an 'on' state and an 'off' state using light. By using a donut-shaped laser beam to switch a localised region of fluorescent dyes into their 'off' states, subsequent diffraction-limited excitation of the fluorophores results in fluorescence only from the centre of the donut, where fluorophores remain in their 'on' states. This emission is not diffraction limited.

RESOLFT requires switchable fluorescent labels, which we can achieve using a photoswitch which, in one form, can quench emission from a fluorophore by Förster Resonance Energy Transfer (FRET). In its resting state, the photoswitch is inactive and the fluorophore can emit. Upon irradiation, the switch is activated and is able to quench fluorophore emission. Using 'dyads' of this type, we have demonstrated enhanced spatial resolution in imaging giant unilamellar vesicle membranes. 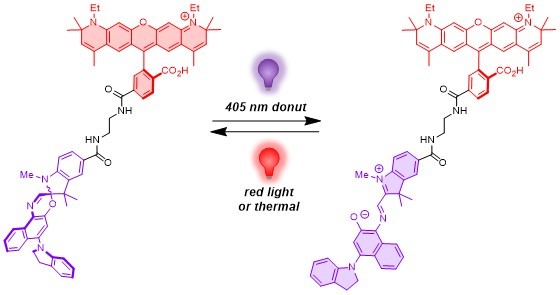 A critical component of these RESOLFT dyads is the photoswitchable quencher. It must switch very efficiently in both directions with a high conversion and be switchable over many cycles. Ideally, it should also switch using visible light. As such, part of our work is directed at optimising photoswitches. There are many classes of photoswitchable molecules, some of which switch in both directions with light, and some which can also switch thermally (for example, the spironaphthoxazine shown above). By synthesising various switches and studying how their structure affects their switching behaviour, we hope to design better switches for use in super-resolution microscopy.

Andrew Frawley is a Junior Research Fellow at Christ Church, hosted in Oxford Chemistry. Prior to taking up his Fellowship in 2019, Andrew was a postdoctoral research associate in the group of Prof. Harry Anderson FRS, here at Oxford. Prior to moving to Oxford, Andrew completed his MChem and PhD degrees at the University of Durham, the latter supervised by Prof. David Parker FRS. During his PhD, Andrew studied chiral emissive lanthanide complexes for security labelling and imaging, and his thesis was awarded the Ken Wade Thesis Prize in 2018.