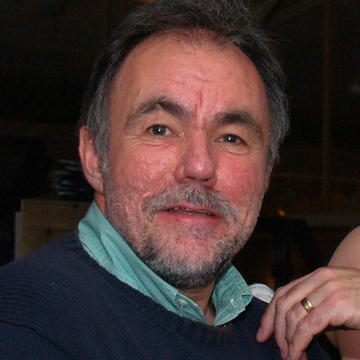 Fraser Armstrong is Emeritus Professor of Chemistry and a Fellow of St John’s College. His interests are in biological chemistry, bioenergetics and in the mechanisms and exploitation of enzymes related to energy production.

He has received a number of awards including the European Award for Biological Inorganic Chemistry, the Carbon Trust Innovation Award, the Max Planck Award for Frontiers in Biological Chemistry and the Royal Society of Chemistry Award for Interdisciplinary Chemistry.

He travels widely giving invited lectures on topics including catalysis, bioenergetics and renewable energy. He is co-editor of Energy … beyond oil which focuses on alternative energy-generating technologies.

Fraser has been elected Fellow of the Royal Society. 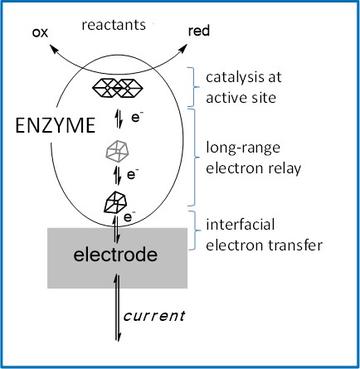 The aim of this research is to establish fundamental chemical insight for underpinning future renewable energy technologies – an area of intense innovation that is now at the forefront of international science. Capturing the Sun’s energy as a storable chemical (fuel) is a familiar characteristic of biology and we are building on the chemistry that is involved, exploring new avenues and inventing technologies based on enzymes. Enzymes are the most efficient electrocatalysts and a wonderful inspiration for us in terms of what is possible! Enzymes can convert interconvert H2, O2 and water with the highest rates and minimum of energy waste, they can activate CO2 – producing CO or formate for fuel and for organic chemistry, with just a tiny overpotential. The need to optimise efficiency as well as rates, when considering how an organism uses the limited energy available to it, has driven the evolution of ‘near perfect’ enzymes.  We are using a suite of novel electrochemical techniques called protein film electrochemistry (PFE), developed in Oxford, to study how enzymes such as hydrogenases (Fe,Ni),  blue Cu oxidases (Cu), carbon-monoxide dehydrogenases (Fe,Ni), and NAD(P)H recycling enzymes (flavin) important for biotechnology, achieve rates that are orders of magnitude higher than conventional catalysts, and do this without requiring a large overpotential to offset a high activation energy. The enzymes are immobilised on suitable electrodes. 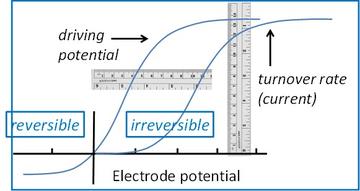 We have demonstrated (a) the use of enzymes in novel fuel cells that can even produce electricity from low H2 levels in air, (b) co-immobilisation of hydrogenases with other enzymes on carbon particles to produce catalysts for coupling H2/H+ interconversion to useful reactions, (c) attachment of enzymes to semi-conductor nanoparticles to harness sunlight and convert water into H2 and CO2 into CO.  All these investigations reveal how human lifestyles could be changed for the better by being able to design catalysts as proficient as enzymes – a point we refer to as ‘bio-inspired catalysis’.  The major lesson for catalyst design is that enzymes have evolved to exploit the ‘outer shell’ – the groups that lie just outside the central catalytic centre.  Every entity is positioned optimally, in both space and time, to perform its role.  The outer shell is very difficult to design and synthesise in chemistry, but easy to modify in enzymes using genetic engineering methods. 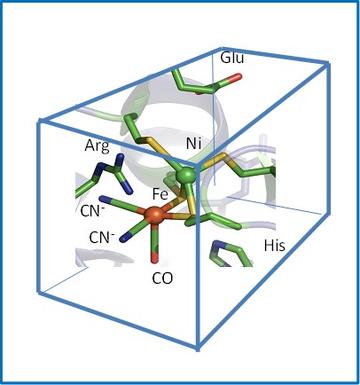 The aim here is to understand the basis of the exquisite catalytic activity of hydrogenases.  These enzymes contain Fe coordinated to unusual ligands (CO, CN-) in two main classes known as [FeFe]- and [NiFe]- hydrogenases. Molecular evolution has resulted in these common metals attaining the superb catalytic activity of platinum, by optimising the arrangement of the inner and outer coordination shells.  In our work, the role of the outer-coordination shell is investigated through genetic engineering (molecular biology).

We are investigating how certain hydrogenases (noting these are enzymes whose active sites are essentially O2-sensitive ‘organometallic’ compounds deeply buried and protected within the protein) are able to function in the presence of O2. The information obtained is important for developing strains of microorganisms that could be farmed to produce H2 from sunlight using photosynthesis. We have succeeded for the first time in systematically re-engineering the active site of two [NiFe]-hydrogenases from E.coli, known as Hyd-1 and Hyd-2. A conserved arginine that is suspended in a ‘canopy’ above the Ni and Fe atoms is particularly important for activity. An interesting possibility is that the strongly basic guanidine head group may assist in H2 cleavage by acting as the base in a ‘frustrated Lewis pair’ mechanism. We are examining the roles of other residues that make up the ‘canopy’ and surrounding region. We are also investigating the roles of the FeS clusters that perform as long-range electron relays within the enzyme – how they transfer and store electrons during the catalytic cycle. 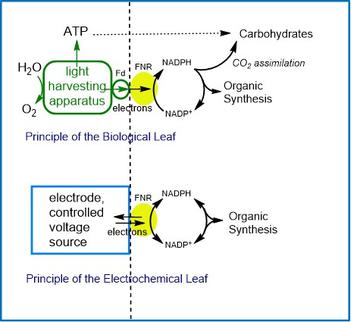 The aim here is to establish new technology for the conversion of solar and electrical energy into high-value organic chemicals.  We invented the ‘leaf’ in 2015, and it was patented in March 2016. The technology is based on the photosynthetic enzyme ferredoxin-NADP+ reductase (FNR) which contains a flavin adenine dinucleotide (FAD) cofactor. The role of FNR in the plant chloroplast is to convert photosynthetically derived electrons into a hydride entity that is stored on the nicotinamide cofactor known as NADPH and used to produce organic molecules from CO2, through the Calvin cycle.

By attaching FNR to an electrode, the electrochemistry of NADP+/NADPH becomes reversible and diffusional-controlled, making it possible to drive a vast number of regio- and stereo-specific organic reactions catalysed by the appropriate secondary enzymes. There are many features in developing this technology, which include engineering FNR to operate with NAD+/NADH, developing electrodes that have FNR and the secondary enzyme positioned close together to maximise efficiency, and the numerous opportunities for bespoke reactor design. We are also configuring the ‘leaf’ as a fuel cell to run on H2, and as a solar cell to run on sunlight.