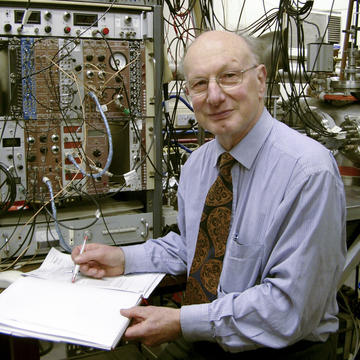 Professor John Eland is an Emeritus Fellow of Worcester College and was Professor of Physical Chemistry in the Department from 1997 to 2006.

The processes of photochemistry such as fluorescence, photodissociation and rearrangement happen not only when molecules absorb visible and uv light but also with soft X-ray photons. At these higher energies there are more primary processes competing in the decay of an excited molecule than in conventional photochemistry; there is single ionisation, multiple ionisation and ion-pair formation in addition to bond breaking. Fluorescence emission often comes from excited fragments as well as from intact molecules or ions. We investigate the whole range of these processes in simple molecules, many of atmospheric or astrophysical importance. To elucidate a problem we usually need to combine our own results from different experimental techniques such as optical spectroscopy, mass spectrometry and photoelectron spectroscopy with theoretical results from molecular orbital calculations. A recent example is the reaction
HNCO+ -> HCO+ + N  which is mysteriously slow (k . 106 s-1) and involves a large kinetic energy release. The photoelectron spectrum, combined with mass spectrometry in coincidence, showed that a B-electron ionisation starts the process. Optical spectroscopy showed that emission competes with the dissociation. Molecular orbital calculations (in cooperation with a theoretical group) identified the states involved and suggested possible detailed mechanisms. Unimolecular reaction rate calculations and non-radiative transition rate comparisons finally tied down the mechanism to two possibilities, with slow internal conversion as a first step. This investigation is still going on.

We are specially interested in the dynamics of reactions that produce three or more products, particularly those that involve splitting a small molecule completely into atomic fragments. A prime question is whether such a reaction is really a single-step molecular explosion
ABC -> A + B + C
or is actually a sequence of two-body steps
ABC -> A + BC -> A + B + C.
We have developed experimental techniques to distinguish these pathways in cases where two of the products are positive ions. For instance, a major pathway for sulphur hexafluoride is
SF6++ -> SF4++ + F2 -> SF3+ + F+ + F2
where the second step is relatively slow. A current objective is to extend this work to processes which produce both positive and negative ions. We have recently discovered a new class of dissociations such as
SO2 -> S+ + O- + O+ + e-
The mechanisms seem to be sequential, but the identity of the individual steps is still being investigated.

Molecular dications, such as CO22+, are components of planetary atmospheres and of astrophysical plasmas; they are much less well understood than neutral or singly ionised molecules. We work on how they are formed, their spectra and how they react. A new instrument, being built in the year 2000, will allow us to take the first complete spectra of the two photoelectrons ejected in double photoionistion. As with normal photoelectron spectroscopy, interpretation of the electron energy spectra will allow us to locate the energy levels of the doubly charged ions. These will then be interpreted with the aid of molecular orbital calculations of the electronic structure of these elusive species.

Techniques and Development of New Instruments

A major part of the research has been the development of new instruments to carry out the different research projects. This has involved the development of coincidence techniques and particle detectors used in mass spectrometry, photoelectron and optical spectroscopy, with fast electronic data acquisition. Desk-top computers are used to run experiments and interpret the results; the emphasis is on experiment rather than theory, mathematical effort is involved mainly in interpreting experimental results.