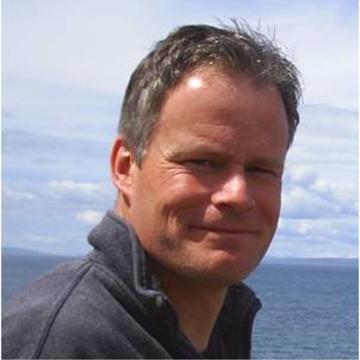 My group's research interests lie in the electronic structure of inorganic systems. We have interests in a wide range of problems drawn from molecular and solid-state transition-metal chemistry as well as main-group reactivity, and as a result we apply a similarly diverse range of methodologies, from empirical theory (Extended Huckel) at one extreme to multi-configurational SCF techniques (CASSCF) at the other. Much of our work is done with DFT, both in molecular and solid-state contexts. We work closely with experimental groups around the world with shared interests in structure, magnetochemistry, electrochemistry and reactivity. The brief summary below highlights some of the areas that we are involved in at the moment.

In collaboration with Professor Zhong-Ming Sun at Nankai University, China, we are working on models of Zintl-ion cluster growth and bonding. These typically highly anionic clusters crystallise from mixtures of low-valent transition metal ions and clusters of tetrel elements ([Sn9]4-, for example). They form elegant and often large clusters, where the final dispersion of elements is dictated by the balance between tetrel-tetrel and transition metal-transition metal bonding vs tetrel-transition metal bonding. The mechanisms of cluster growth are a particular interest to us, as is the relationship between these molecular species and the extended Zintl phases. 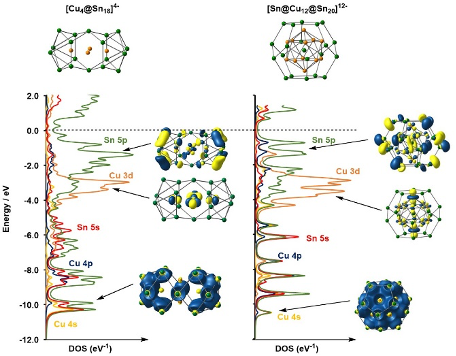 The electronic structure of cluster compounds

Metal cluster compounds present a significant challenge to models of structure and bonding - the work of Wade and Mingos in the 1970's, for example, revolutionised our understanding of electron-deficient boranes and their transition metal analogues. More recently, endohedrally encapsulated clusters, where a transition metal sits inside a cluster cage, have provoked interest, in part because they represent the smallest models for transition metal impurities in bulk semiconductors like silicon or germanium. In many cases the metal and cage are essentially independent units: 60-electron [Ni@Pb12]2-, for example, can be thought of as a closed-shell d10 metal inside a 'closo' [Pb12]2- icosahedron (4n + 2 = 50 valence electrons). In work with Prof José Goicoechea's group, we have explored a relatively new class of cluster where the vertices of the cluster are 3-connected rather than 4- or 5-connected, as is typical of deltahedral structures. 3-connected vertices are generally associated with electron precise (5n) electron counts, but if 5n electrons are assigned to the cage in e.g.[Ru@Ge12]3-, the metal is left in an unreasonably high oxidationstate. The key to understanding these systems is to note that pairs of electrons can play a dual role, satisfying the valence requirements of the metal and the cluster simultaneously. This 'jigsaw' model emphasises the importance of interpenetration of the electron density at the metal and on the cluster. In cases where the endohedral transition metal ion lies in the middle of d-block, the ground-state wavefunction is typically strongly multi-configurational. In such cases, the CASSCF methodology offers an alternative perspective to DFT.

Metal-Metal Bonds
The interactions between transition metal ions themselves are notoriously difficult to model theoretically, and the ground-state wavefunctions are typically poorly described by a single-determinant. This problem is particularly pressing in the first-row transition metals, where the absence of a radial node in the 3d orbital means that electron-electron repulsions are large. We use CAS/GASSCF and CASPT2 methodologies to explore the evolution of metal-metal bonding in these systems, both asa function of composition and of oxidation state.

Electronic structure of low-dimensional metal oxides
Oxide lattices typically stable the highest accessible oxidation states of transition metal ions, but the reduction of perovskite and Ruddlesden-Popper phases by sources of hydride, developed by Hayward and co-workers, has provided access to a wide range of new compounds with the transition metal in unprecedented low oxidation states. This includes cases where the hydride replaces the oxide in the lattice and other where the hydride removes layers of oxide ions as H2O. These compounds are kinetically but not thermodynamically stable, but nevertheless they offer the opportunity to study transition metal ions in previously unprecedented electronic environments.

John E. McGrady is a professor of Computational Inorganic Chemistry in Oxford Chemistry. He is also a tutorial Fellow and Tutor for Admissions at New College, Oxford. His research interests involve the application of a variety of electronic structure methods to problems of structure, bonding, reactivity and magnetism. He has a particular interest in metal cluster chemistry and bonds between metal atoms. Between 1997 and 2006 John was a lecturer and senior lecturer at the University of York, after which he moved to the University of Glasgow as WestCHEM Professor between 2006 and 2009, when he took up his present position at Oxford. Earlier in his career, he held postdoctoral positions at Imperial College (1994-95, with Professor Mike Mingos) and at the Australian National University in Canberra (1995-1997, with Professor Robert Stranger). He was also a Marie-Curie Fellow at the Université de Montpellier II (1998, with Professor Odile Eisenstein). He obtained a BA from the University of Oxford in 1990, and a PhD from the Australian National University in 1994.