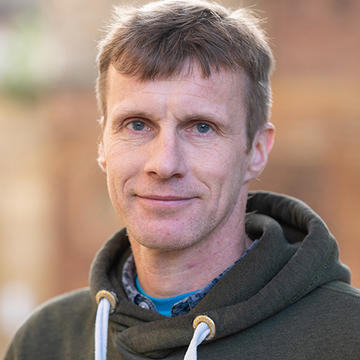 Together with the group of Ard Louis in Oxford Physics, we have developed oxDNA, a nucleotide-level coarse-grained model of DNA that is particularly suited to studying DNA biophysics and DNA nanotechnology. The code for simulating the oxDNA model is publicly available and is being increasingly widely used in these communities. The coarse-grained nature of the model allows longer time scale processes and larger systems to be studied than is feasible with all-atom approaches. For this reason, oxDNA has been much used to study DNA origami, large DNA self-assembled nanostructures that each contain about 14,000 nucleotides; this has led to many collaborations with leading experimental DNA nanotechnology research groups, including the group of Andrew Turberfield in Oxford Physics. Particular biophysical research interests are the response of DNA to twist stress and how this is altered in the presence of DNA damage. We are also interested in the mechanical properties of large DNA nanostructures, and how they can be used to apply or sense force. Overlapping with our other research interests, we are exploring how DNA origami can be used as building blocks for larger scale self-assembly.

The group has been at the forefront of exploring how colloidal particles with directional interactions could be used to assemble a wide variety of structure, be they crystals, high symmetry clusters or, most recently, quasicrystals. In particularly, we have recently discovered how to design such "patchy particles" to assemble into icosahedral quasicrystals. We plan to extend this approach to quasicrystals with other symmetries, including symmetries never previously observed in materials, and are exploring ways to realize these patchy particles using DNA origami with experimental collaborators.

Colloidal rods form nematic phases where the particles align in a particular direction as their concentration is increased. If the particles possess chirality, the nematic phase formed can be a cholesteric (chiral nematic) phase. We are interested in the relationship between the chiral structure of the liquid-crystal forming particles and the chirality of the cholesteric phase, and have developed an efficient classical density functional theory approach that enables the properties of the cholesteric phase to be predicted from a realistic description of the individual chiral particles. Combined with oxDNA, we have applied this approach to explain the liquid-crystalline behaviour of chiral DNA origami rods, highlighting the role of the particle's chiral shape fluctuations in determining the cholesteric behaviour. We plan to extend our work to consider other types of nematic phases, and how origami rods might be used to realize them.

Chemistry at the Interface with Biology and Medicine

Theory and Modelling in the Chemical Sciences

Jonathan Doye is a Professor of Theoretical Chemistry, having arrived in Oxford as a lecturer in 2006. Prior to that, he was based in Cambridge first as the Sir Alan Wilson Junior Research Fellow at Emmanuel College  (1998-2001) and then as a Royal Society University Research Fellow (2001-2006). He also did his undergraduate degree and PhD (supervised by David Wales on atomic clusters) in Cambridge. He was a post-doctoral researcher with Daan Frenkel at the FOM Institute for Atomic and Molecular Physics in Amsterdam working on polymer crystallization (1996-1998). He was awarded the Royal Society of Chemistry Harrison Memorial Prize (2000). He is an International Collaborator of the Brandeis Bioinspired Soft Materials MRSEC (Materials Research Science and Engineering Center).