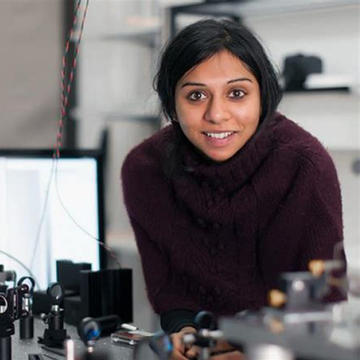 In my group we use a combination of experiment, theory and simulation to measure, interpret, understand and control molecular-level interactions and transport at the nanometer scale in fluids. A major current interest is the electrostatic interaction which is strong and long-ranged in fluids, and ubiquitous in chemical and biological systems. Using the familiar repulsive force between like-charged entities we recently demonstrated the ability to stably trap single molecules in solution in three dimensions. Our use of equilibrium thermodynamics to achieve this long-standing experimental goal is a paradigm shift in a century-old effort that relied nearly exclusively on externally applied electromagnetic fields to control and manipulate matter all the way from ions to large particles.

The availability of traps of various kinds has played a defining role in measurement and experiment in many areas of gas and fluid phase research. In contrast to our generally static macroscopic experiential world, a microscopic bit of matter in solution is in continuous motion. Pummelled at random by the solvent, an object suspended in solution engages in a Brownian walk that will eventually take it far away from where we first started to observe it. At the nanoscale, even applied fields, much like gravity, are too weak to substantially influence the trajectory of this tiny bit of matter. Placing surfaces in the vicinity however puts new forces into play. By appropriately tailoring the geometry of the walls we are able to harness these intrinsic object-surface forces and manoeuvre our entity of interest into a desired spatial location and orientation in a fluid. Once there, the object levitates stably for long periods. The “electrostatic fluidic trap” - which exploits the electrical charge on an object in order to confine it - is opening up unprecedented new avenues in the measurement of molecular properties and structure in solution.

Electrostatics plays a fundamental role as an interaction mechanism at the molecular scale, but has remained relatively unexplored terrain at the experimental level. New lines of activity unfolding in our lab take a microscopic experimental and theoretical view of the electrostatic interaction in the fluid phase. A key focus of these efforts centres on exploring the role of the interfacial solvent in modulating the sign of the force between like charged particles in solution. We find e.g., that the behaviour of molecular water at an interface can render net attractive the canonically expected Coulombic repulsion between like charged objects in solution.

Madhavi Krishnan is Associate Professor of Physical Chemistry at the University of Oxford. She did her undergraduate work at Anna University, Madras, India followed by a PhD at the University of Michigan at Ann Arbor. Supported by Alexander von Humboldt and Marie Curie Fellowships she carried out postdoctoral work in single molecule biophysics and nano-optics at Technical University Dresden and ETH Zurich respectively. In 2012, following a brief stint as a Visiting Scholar at Harvard School of Engineering and Applied Sciences she was appointed Assistant Professor in Physical Chemistry at the University of Zurich and received a Professorship of the Swiss National Science Foundation. She was awarded the 2016 Nernst-Haber-Bodenstein prize of the German Bunsen Society, and the 2020 Corday Morgan Prize of the Royal Society of Chemistry for her current research which examines molecular electrostatics in the fluid phase, including both experiment and theory.