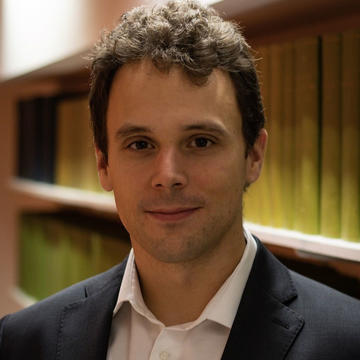 The Burt laboratory applies mass spectrometry imaging and ultrafast laser spectroscopy to observe molecular dynamics over femtosecond timescales. This cross-disciplinary approach combines fundamental explorations of photochemistry with recent advances in particle sensors and ionization techniques, and is accessible to students interested in physical or computational chemistry, chemical physics, computer science and biochemistry. Examples are provided below:

Structural dynamics reveal molecular behaviour that can be used to direct reactions or create chemical devices. They are conventionally measured using absorption spectra, which characterize molecules according to the light they absorb at different frequencies. Spectra are observed over time to follow a reaction. However, molecules do not necessarily absorb light at easily accessible frequencies, meaning that important reaction steps are often inaccessible.

Coulomb explosion imaging (CEI) opens the exciting possibility of observing such chemistry directly. CEI uses an intense and ultrafast laser pulse to quickly remove binding electrons from a molecule through field ionization, leaving a highly charged ion that explodes into fragments due to Coulomb's law. Measuring and correlating the relative velocities of these fragments as a function of time allows the shape of the molecule before the explosion to be reconstructed at different stages of a reaction. 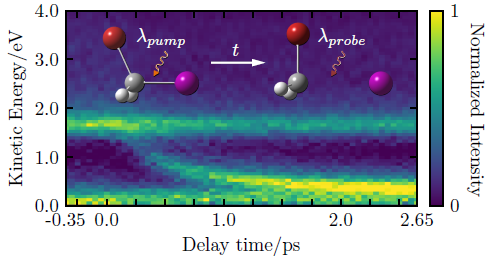 Projects in this area focus on initiating photochemistry and probing the resulting dynamics by CEI. Figure 1 illustrates a typical example where the C-I bond distance of CH2BrI is probed following its photolysis at 272 nm. The I and CH2Br co-fragments are initially close together, leading to significant electrostatic repulsion following ionization. The greater separation at later times results in less kinetic energy, creating a 'Coulomb curve' that represents the bond dissociation.  Modeling this curve reveals the excitation of the CH2Br fragment and the C-I bond length.

This research is aimed at observing complete reactions for more complex processes, particularly as they pass through short-lived intermediates and transition states that are of fundamental importance for controlling reactivity.

The emission directions of Coulomb explosion fragment ions can be correlated using covariance or coincidence analysis to identify structural isomers and chiral features. Figure 2 illustrates this for two C6H3F2I isomers. In these examples, the relative ion emission angles of the I+, F+, and H+ fragments are rotated into a common recoil-frame, where the I+ emission angle is set to 0°.  The distributions of the F+ and H+ fragments relative to I+ therefore provide information on the original bond angles of the equilibrium structures and allow isomers to be unequivocally assigned. 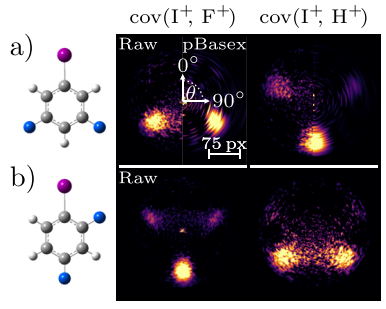 Projects in this area include applying covariance analysis in conjunction with time-resolved CEI to follow structural dynamics, and developing methods for three-body correlations involving ions and electrons.

Further information on the above topics can be found in the following publications:

Michael Burt is an EPSRC Early Career Fellow. He joined Oxford Chemistry's academic staff in 2019, following postdoctoral research with Terry McMahon (University of Waterloo) and Mark Brouard (University of Oxford). Originally from Canada, he obtained his BSc (Hons) and PhD from the Memorial University of Newfoundland under Travis Fridgen. His research group investigates structural and reaction dynamics by combining mass spectrometry with action or femtosecond spectroscopy, and frequently collaborates with researchers working at intense X-ray free electron laser sources.