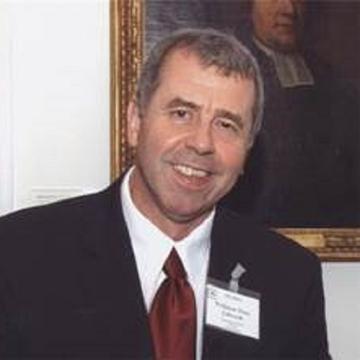 Our research covers a broad range of areas from Metal-Insulator Transitions in solids and liquids through mesoscopic, size-dependent phenomena and high-temperature superconductivity.

Research from our Group involves many fruitful collaborations; we are delighted to have joint publications with 4 Nobel Prize Winners: Professor John B Goodenough, Sir Nevill Mott, Professor Roald Hoffmann and Sir John Houghton; reflecting our multi-disciplinary interests and activities.

We are aiming for a paradigm shift in the burgeoning real-world problem of our climate system and global warming. We see these as inspiring challenges for scientists and engineers to provide clean energy for our world.  Areas of our active research are summarised below:

The use of fossil fuels as an energy source continues to increase, especially in developing countries. This is due to fossil fuels remarkably high energy content, its large resource base, its general availability at reasonable cost and the large investment in technology and infrastructure which presently utilize fossil energy.

Accepting the continued use of fossil fuels as a major energy source for the foreseeable future , we target two solutions for limiting CO2 from entering the atmosphere:  (A) Hydrogen-Stripping from fossil fuels – without combustion – leaving only solid carbons as a co-product; and (B) Carbon Capture as CO2 – following combustion of fossil fuels – to produce Carbon-Neutral Fuels.  We have also discovered a route to Hydrogen Stripping from Plastics-Waste (C).

(A)    Hydrogen-Stripping from Fossil Fuels

We take advantage of the naturally-high hydrogen content of fossil fuel hydrocarbons to selectively release only their constituent hydrogen, with little CO2 production. The major co-product, solid carbon, can be stored underground safely or used commercially to make high-value chemicals. 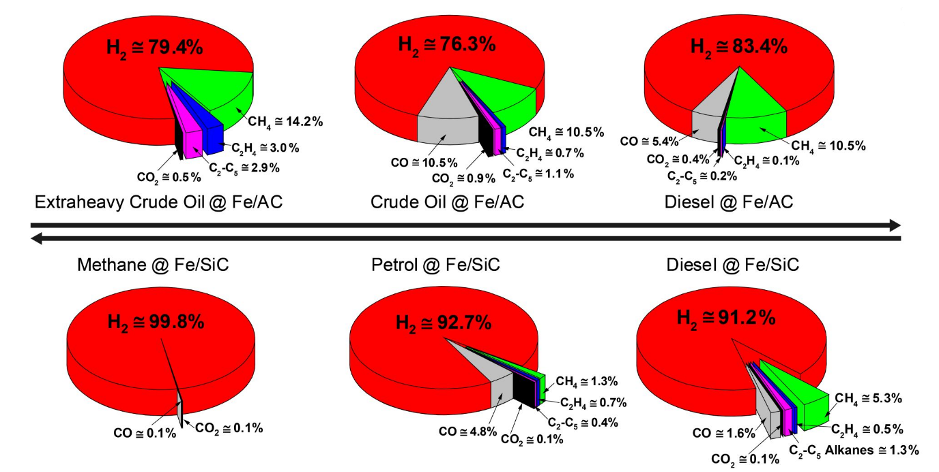 We have recently reported the first-ever direct conversion of CO2 into aviation fuel. In more than 200 Press Releases, worldwide, this work has been recognised as the gateway to an Aviation Fuel Circular Economy. (Oxford researchers hope to convert carbon dioxide into jet fuel - The Washington Post and Scientists create jet fuel using CO2 that could lead to carbon neutral flights | The Independent). 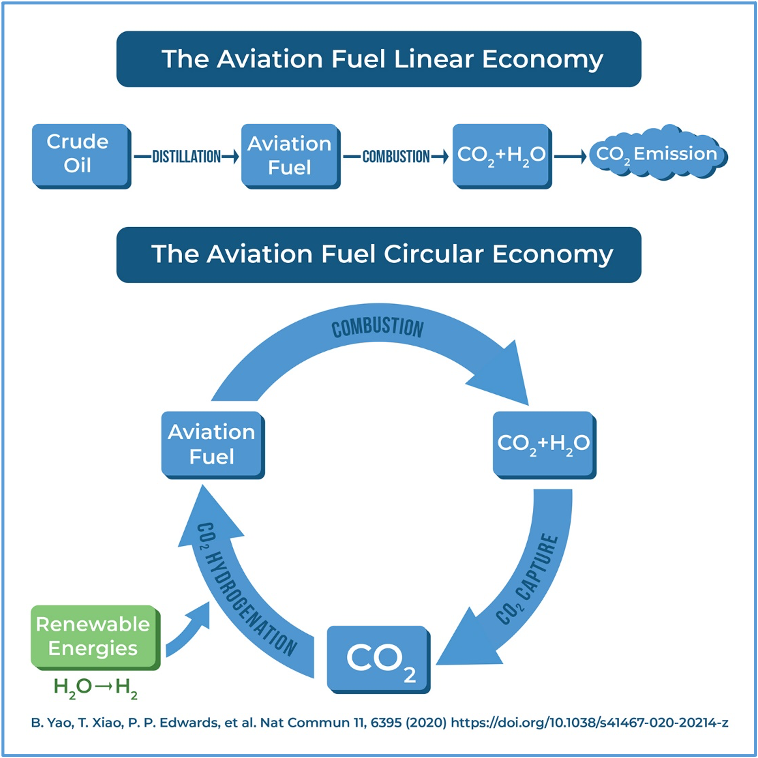 Plastics-waste is seen by many as an environmental crisis as severe – or indeed more severe – than climate change.

Our microwave-initiated catalysis of a mechanical mixture of plastics-waste and inexpensive iron-based catalysts produces copious amounts of hydrogen and multi-walled carbon nanotube materials with negligible amounts of CO2 and liquid oil products: “Microwaves could turn plastic waste into hydrogen fuel”, October 17 2020, The Times.

This process works on real-world plastics-waste, and mixtures of plastics, including polyethylene, polypropylene and polystyrene; the process can also cope with contaminants such as water, oil, metal and dust, etc.

For a general overview, see “What, Why and When is a Metal?
(https://drive.google.com/file/d/1ama0KNBD-bPJ74Oylhjet8b1u53BWC41/)

There are numerous materials for which small changes in temperature, pressure or composition can transform a highly-resistive non-metallic or insulating material into a highly-conducting metallic state. This is the Metal-Insulator Transition (MIT). We try and understand the nature of the MIT in both liquids, solids and supercritical matter; a range of materials and systems are shown below.  In many systems the transition to the metallic state is reflected in over 8-orders-of-magnitude increase in conductivity. 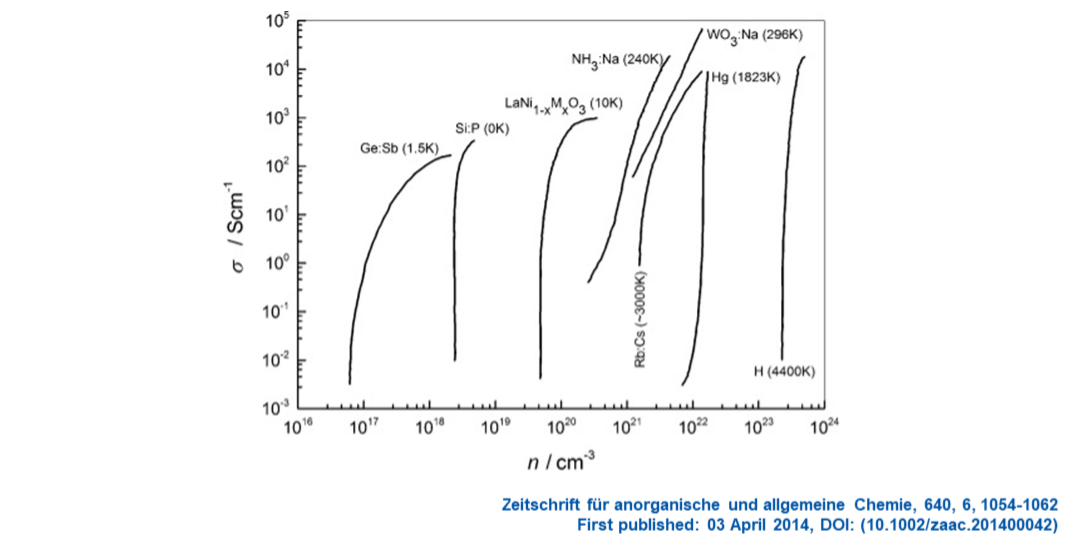 Especially important are the MIT’s in high-temperature superconductors and critical materials driving future sustainable energy technologies; a prototypical example is given below.

Transparent conducting oxides (TCO’s) are key energy materials, with applications in solar cells, LED’s and touchscreen displays. The most important TCO is currently indium tin oxide (ITO; as a powder and a thin film shown above); it possesses the remarkable combination of high optical transparency and high conductivity.  However, indium is costly in both financial and earth-abundance terms.  Our research with Sir Michael Pepper FRS (UCL) focusses on reduced-indium or even indium-free TCO’s, with similar properties and performance as ITO.  A particular interest is the nature of the MIT in these materials.

(B) Electrons and Alkali Metal Anions in Solution 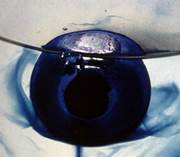 Dating back to their first observation by Sir Humphry Davy – remarkably, in 1808(!) – are the beautiful blue and bronze colours of alkali metal-ammonia solutions. A thorough understanding of these fascinating systems, in solvents beyond ammonia and the nature of their Electrolyte to Metal Transition, is part of a collaboration with Professors Tony Barrett FRS (Imperial College), Roald Hoffmann ForMemRS (Cornell), Eva Zurek (Buffalo), and Neil Skipper (UCL).  Most recently, new insights into the nature and chemical reactivity of alkali metal anions were made possible using Professor Barrett’s major innovations in the design and synthesis of extremely-stable complexants.

(C) The Challenge of High-Temperature Superconductivity 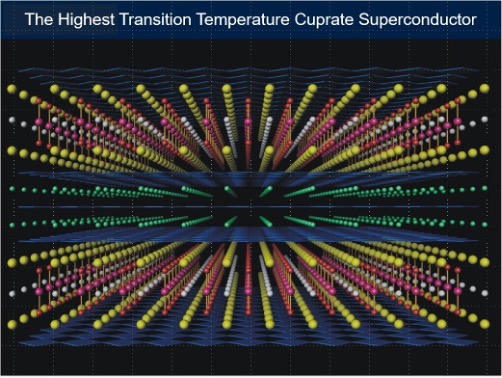 Superconductivity is a zero-resistance quantum-coherent state with applications ranging from the production of carbon-free electricity from fusion to quantum computing. The observation, in 1987, of high-temperature superconductivity in black ceramic cuprate materials by J.G. Bednorz and K.A. Muller represents one of the greatest experimental discoveries of the last century; their Nobel Prize was awarded just one year following the discovery.

In 2009 Professor Edwards was elected to the German Academy of Sciences Leopoldina, and he was elected Einstein Professor for 2011 by the Chinese Academy of Sciences. In 2012 he was awarded the Bakerian Lecture by the Royal Society. In the spring of 2012 he was elected International Member of the American Philosophical Society; one of only four people from the UK in that year to be awarded this honour across all subjects and disciplines. Later in 2012 he was awarded the Worshipful Company of Armourers and Brasiers Materials Science Venture Prize for his work on new, low-cost, high-performance conducting oxide coatings for solar cells and optoelectronic materials. In the autumn of 2013 he was elected Member of Academia Europaea, and he was elected as a Foreign Honorary Member of the American Academy of Arts and Sciences in 2014.