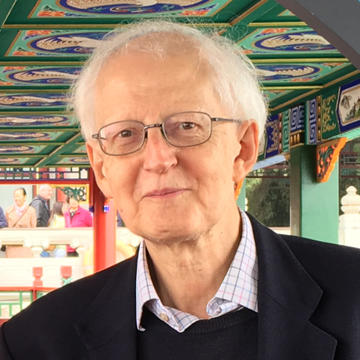 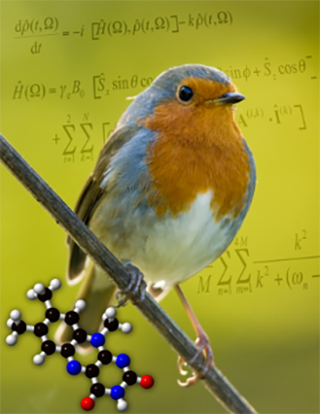 Small night-migratory songbirds, travelling alone over thousands of kilometres, are spectacular navigators. The successful completion of these magnificent voyages depends crucially on the birds' ability to sense the direction of the Earth's magnetic field. Exactly how they do this is still a mystery, but the experimental evidence suggests something extraordinary. The birds' magnetic compass sensor seems to rely on chemical reactions in which coherent quantum phenomena indirectly allow magnetic interactions a million times smaller than thermal energies to be detected in biological tissue.

In collaboration with colleagues in the Oxford Chemistry Department (Christiane Timmel, Stuart Mackenzie, David Manolopoulos, and Justin Benesch) and at the University of Oldenburg (Henrik Mouritsen and Ilia Solov’yov), we aim to discover the biophysical mechanism of compass magnetoreception.

The primary magnetoreceptor is believed to be cryptochrome, a blue-light photoreceptor protein found in a variety of cell types in the birds’ retinas. Photo-induced electron transfer reactions within the protein produce pairs of radicals in coherent electron spin states, far removed from equilibrium. As a consequence, and because the radical recombination reactions conserve spin, exceedingly weak magnetic interactions can affect the quantum yield of a form of the protein that could act as a signalling state.

Some of the questions we are attempting to answer:

This work is currently funded by an ERC Synergy Grant, Quantum Birds, held jointly with Henrik Mouritsen (University of Oldenburg). I am also part of the Collaborative Research Centre, Magnetoreception and navigation in vertebrates.

A Quantum Needle in a Haystack

I have spent most of my life in the Chemistry Department at Oxford, as an undergraduate (1973-1977), graduate (1977-1980), Junior Research Fellow (1982-83) and, since 1983, University Lecturer in Physical Chemistry and Fellow and Tutor in Chemistry at Corpus Christi College. My only time away from Oxford was as a postdoc at the University of Groningen (1980-82). Over the years I have worked on a number of topics around magnetic resonance and the effects of electron and nuclear spins on chemical reactivity, an area known as Spin Chemistry. These include spin hyperpolarization, protein structure and folding, photosynthetic energy conversion, and NMR methodology. Since about 2005 I have been trying to unravel the biophysical mechanism that allows migratory song birds to detect the direction of the Earth’s magnetic field as an aid to navigation.

I am the author of two Oxford Chemistry Primers on NMR.