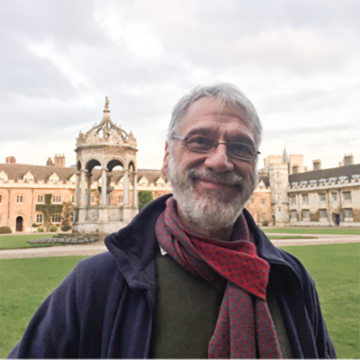 My research interests are mainly focused on the discovery, development, and understanding of the behaviour of functional inorganic materials, principally for electronic and optical applications. In particular, I have had a long-standing interest in the effects of (structural) disorder on the properties of materials, especially amorphous solids and glasses, as well as liquids. This research lies at the boundaries of solid-state chemistry and physics, materials science and, in the case of device studies, electrical engineering.

Much of the work involves computer simulation, using ab initio density-functional-theory (DFT) codes (in collaboration with colleagues in the Department of Engineering at Cambridge, the Computational Physics Laboratory, Tampere (Finland) and Beihang University (Beijing)), as well as molecular-dynamics (MD) simulations using machine-learned, linear-scaling interatomic potentials (in collaboration with a group at the Department of Engineering at Cambridge, and Professor Volker Deringer in Inorganic Chemistry). In addition, I collaborate with other research groups around the world, e.g. Singapore University of Technology and Design, and Shanghai Institute of Micro-System and Information Technology, in performing related experimental investigations of various functional materials of interest, and in the development and technical assessment of devices fabricated using such materials.

In the recent past, I also led experimental programmes to develop a variety of chemical sensors for (bio)medical applications, using both mechanical-transduction and optical-spectroscopic techniques, particularly in collaboration with the Department of Clinical Neurosciences at Addenbrooke’s Hospital, Cambridge. In addition, I have employed optical-spectroscopic techniques in order to perform non-invasive investigations of pigment and binder layers on painted works of art, in association with the Hamilton-Kerr Institute and the Fitzwilliam Museum, Cambridge.

The technological roadmap of current Si-based electronic-memory technologies, such as non-volatile flash memory and volatile dynamic random-access memory (DRAM), based on stored electrons, is predicted to come to an end in the near future when further size down-scaling becomes impossible. Thus, new data-storage technologies are urgently needed. One such novel non-volatile-memory technology, already being commercialized as Optane® products by Intel, is based on ‘phase-change memory’ (PCM) materials, such as Ge2Sb2Te5 (GST). In these materials, the application of appropriate heating voltage pulses causes ultrafast (~ns), reversible changes between electrically-conducting metastable crystalline (‘1’) and electrically-resistive glassy (‘0’) phases. Thus, binary information is stored in a non-volatile manner in the PCM material in the form of its metastable structural state, rather than as stored electrons.

We were the first to simulate the entire PC cycle for GST – crystal-liquid-glass-crystal – using DFT-based MD [1]. Since then, we have performed numerous DFT-MD simulations of the phase transformations in PCM materials, which have revealed the origin of the ultrafast crystallization time of PCM materials [2]. We also hold the experimental record for the glass-to-crystal switching time (the rate-limiting step) of <500 ps for a GST PCM device, using a voltage-pulse ‘priming’ technique [3]. Using DFT-MD, we also revealed the atomistic origin of the ‘radiation hardness’ for stored binary data shown by GST PCM devices [4].

The chemical-bonding origin of the marked electrical/optical property contrast between glassy and crystalline states of PCM materials has long been uncertain and controversial. Recently, we have demonstrated [5], using DFT-based simulations, that three-centre, four-electron (3c/4e) hyperbonding interactions in linear, chalcogen-based trimeric configurations (similar to those occurring in the linear tri-iodide ion, I3-) are dominant in the metastable, distorted-rocksalt crystalline phases of PCM materials, but are much less prevalent in the disordered glassy phase, where normal two-centre, two-electron (2c/2e) covalent-bonding interactions are dominant. Such hypervalently-bonded, linear 3c/4e structural units are much more polarizable than 2c/2e units, thereby accounting for the observed property contrast. This model also explains why PCM materials are generally telluride materials, since hyperbonding interactions are much stronger in tellurides than in other chalcogenide (sulfide, selenide) materials.

Although DFT-based MD simulations can give reasonably accurate results, they suffer from pronounced scaling limitations, since the computational time scales cubically (O(N3)) with the number, N, of atoms in the simulation cell. As a result, such DFT-based simulations are generally limited to a single model, of size N <500 atoms, and for simulation times <1 ns. In order to obviate this shortcoming, it would be desirable to utilize linear-scaling (O(N)) interatomic potentials, but with DFT levels of accuracy in energies and forces. Such potentials can now be generated using machine-learning (ML) methods. We have constructed the first ML potential for the ternary PCM system, GST [1], and used it to simulate models of GST containing 24,300 atoms [2]. This ML potential has also been used to construct an ensemble of 30 models of glassy GST in order to perform a statistical investigation of the prevalence, and atomic nature, of defect states with electronic energies lying in the bandgap region of the density of states [3]. We have also demonstrated that this ML potential is chemically transferable, to the case of the PC material Sb2Te3, an end-member of the GeTe- Sb2Te3 compositional tie-line including the 225GST composition [4].

We have also, in collaboration with Professors Volker Deringer and Mark Wilson, performed a series of MD simulations of liquid and (melt-quenched) glassy Si using ML potentials, e.g. providing information on the nature of the glass transition and on the structural similarity between the glass and crystalline polymorphs for glassy models prepared with quench rates as low as 1010 K/s [5]. This work culminated in the unprecedented simulation of a 100,000-atom model of melt-quenched glassy Si with DFT level of accuracy [6]. The simulations also revealed a three-step transformation sequence for glassy Si under increasing external pressure. First, polyamorphic low- and high-density amorphous regions coexist, rather than appearing sequentially. Then, a structural collapse into a distinct, transient, very-high-density amorphous (VHDA) phase was observed; this phase rapidly nucleates crystallites, leading finally to the formation of a hexagonal polycrystalline structure [6].

Stephen Elliott has been a Visiting Professor in the Physical and Theoretical Chemistry Laboratory at Oxford since January 2021. Prior to that, he was Professor of Chemical Physics in the Department of Chemistry at the University of Cambridge until he retired in 2019, having been, in turn, a Demonstrator (Assistant Lecturer), Lecturer and Reader there since 1979. He was a Professorial Fellow at Trinity College, Cambridge, until retiring in 2020, having been a Prize (Research) Fellow, and then a Teaching Fellow in Physics and Chemistry, since 1977. He was College Steward from 2014 to 2017, and has been Chairman of the Wine Committee since 2005, and a member of the Committee since 1977. In addition, he was Professor of Physics at the Ecole Polytechnique, Palaiseau, France, from 1998 to 2000. He was an undergraduate at Trinity College, Cambridge, and obtained a bachelor degree in Theoretical Physics from the University of Cambridge, followed by a PhD on theoretical and experimental studies of amorphous solids at the Cavendish Laboratory, Cambridge. His work has been recognised by a number of awards and prizes, including a Nuffield Foundation Science Research Fellowship in 1991, the 1992 W.H. Zachariasen Prize, the 2001 Stanford R. Ovshinsky (inaugural) Award, the Chancellor’s Medal, University of Pardubice, Czech Republic, awarded in 2012, the 2014 George W. Morey Award of the American Ceramic Society, the 2017 Royal Society of Chemistry John B. Goodenough Award, and a Kavli-Winton Fellowship, University of Berkeley (2017).