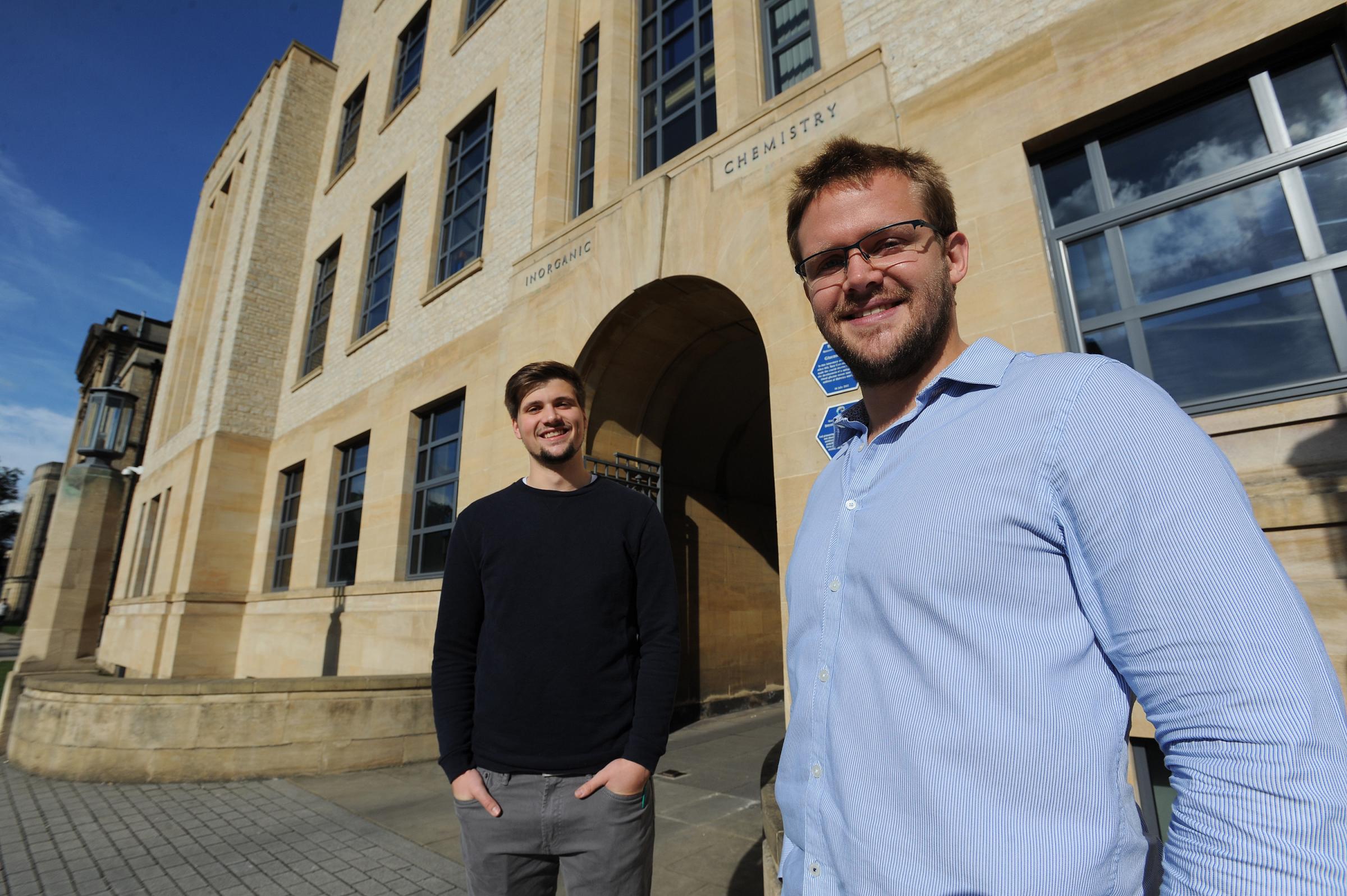 The Royal Commission for the Exhibition of 1851 Industrial Fellowships are aimed at outstanding students working closely with industry during their graduate studies.  There are usually 10 of these prestigious fellowships awarded each year.  Oxford chemists awarded these fellowships in recent years include:

Tom Fleming, EPSRC CDT in Synthesis for Biology and Medicine, 2016 (Evotec and GlaxoSmithKline)

Tom Fleming, DPhil candidate in Professor Tom Brown's nucleic acids chemistry research group and a student of the Synthesis for Biology & Medicine Centre for Doctoral Training, said “My research is focussed on discovering the first chemical inhibitors of a DNA repair enzyme that has promising biological evidence for being an attractive target for chemotherapy,”  So far in his research, Tom has developed an assay capable of efficiently screening thousands of potential drug molecules and has worked with both Evotec and GlaxoSmithKline to find the first hit molecules. Tom's methodology has been adopted by industry and raised the profile of this novel target.

Ammonia is one of the most important base chemicals in the world, with its large-scale production by the Haber-Bosch process from hydrogen and nitrogen contributing approximately 2% to global CO2 emissions. Tim’s research in Prof Edman Tsang's group focusses on developing novel environmentally-friendly ammonia production routes that would allow ammonia to be used as a potential carbon-free energy-storage vector for renewable energy technologies and ensure a sustainable ammonia supply for the future. “Together with Siemens, we are developing an electrochemical ammonia production process in molten salt systems which in contrast to the Haber-Bosch process works at ambient pressure and can utilize water as a hydrogen source,” Tim explains. “In short, this works by reducing nitrogen gas to nitride ions at the cathode which then react with water to form ammonia while oxygen is evolved at the anode.” Tim’s Fellowship has allowed him to significantly accelerate the catalyst synthesis and testing by building a new reactor. “The network of exceptional fellows from across all scientific disciplines has been a source of enormous support and inspiration. Overall becoming part of the Royal Commission family has been a fantastic experience and a great privilege.”

Tatiana's research aims to produce a molecule at the heart of important medical treatments quicker which could potentially help patients undergoing cancer-fighting treatments.  Traditional methods of creating these molecule – tertiary amines – can be harmful to the environment and also difficult to produce in large quantities, but Tatiana hopes to develop a new synthetic chemical tool that uses light to develop it faster.  The technique, similar to photosynthesis, will streamline the growth of tertiary amines at an industrial scale, helping pharmaceutical companies to make the dependant medicines.

Jack is working to synthesise a naturally occurring molecule that shows promise in the treatment of multi-drug resistant cancers.  Certain cancers are hard to treat as they harness a natural cell cleaning mechanism to reduce the effectiveness of drugs built to target them. The mechanism in question is a protein called P-glycoprotein (P-gp), found in animals and bacteria, and its role is defensive – it pumps harmful molecules out of the cell. Many cancers produce high amounts of P-gp, which make them resistant to drugs designed to tackle them.  Jack said: “I was inspired by that spirit of industrial optimism and innovation. I felt fondly about the idea of the Commission, and when I found out they were offering Fellowships I couldn’t help but apply. I was absolutely delighted to be accepted onto the programme.”

Jack hopes to synthesise molecules within a group of natural products found in the Euphorbia genus of flowering plants, known as the jatrophane family of Euphorbia diterpenes, that have been shown to inhibit P-gp twice as much as current standards. Synthesis is necessary as the plants produce only a tiny amount of these compounds.  Synthesis will allow UCB BioPharma to test these molecules as pre-clinical candidates for co-administration with chemotherapy and could pave the way to the discovery of an even more potent version of the compound.

Daniella is developing a versatile chemical method for synthesising chiral molecules. Nature has evolved highly sophisticated machinery for making such molecules. It uses enzymes, which are exquisite biological machines, to form new chemical bonds in a very precisely controlled manner. Most biological molecules can exist in either a right-handed or left-handed form – a property known as chirality. Finding new ways to control chirality is of great value to the pharmaceutical industry, as chirality can have important implications for drug development; one form of a molecule may have therapeutic value, whereas its mirror image may be detrimental.

This research focuses on a process known as hydrogen borrowing to mimic the natural processes that control chirality. Hydrogen borrowing uses common alcohols to elongate carbon chains, a process that is essential to synthetic chemistry and the synthesis of architecturally complex three-dimensional chemical scaffolds. Hydrogen borrowing provides a green alternative to traditional methods, producing only water as waste.  Daniella hopes to develop hydrogen borrowing into an applicable method for synthesising molecules and build a library of biologically relevant materials, as well as adapt this process from a small laboratory scale to an industrial scale.  Daniella said: “I feel extremely honoured to be accepted onto the programme. I’m grateful for the incredible opportunity and highly motivated to continue my research. The fellowship is helping me access state-of-the-art equipment in industry, become fully integrated with the company and tap into the wealth of knowledge both at AstraZeneca and the University of Oxford.”