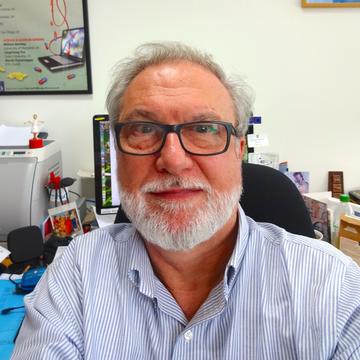 Professor Hagan Bayley is the founder of Oxford Nanopore Technologies, which recently made a record-breaking debut on the London Stock Exchange as one of the UK’s most valuable spinouts.  The company’s goal is “to enable the analysis of anything by anyone, anywhere” and its technology has revolutionised DNA and RNA sequencing.  Nanopore’s portable devices have been used on the International Space Station and to analyse Ebola and Zika viruses in the field.  Nanopore sequencing is now used in over 100 countries and, since early 2020, the company's technology has been used in the surveillance of the Covid-19 pandemic.  Professor Bayley talks about the science that led to the formation of Oxford Nanopore, his experience of setting up a company, and his hopes for the future of basic science.

You did your BA at Oxford in 1974, followed by a PhD at Harvard and postdoctoral work at MIT.  What brought you to this area of research?

I was an undergraduate at Balliol and had terrific tutors there – you could learn anything you wanted to and have wide-ranging discussions, so that that was a pretty important formative period.  I did my Part II and eventually my PhD with Jeremy Knowles.  At the end of the Part II year, he moved to Harvard and his group moved with him.  At that time, biological membranes were a really hot topic.  We know so much about them now, but in those days, we knew hardly anything.  Jeremy Knowles was interested in developing reagents that would label the chemically inert parts of membrane proteins that are in the lipid bilayer, and that eventually formed my PhD topic.  After that I moved to MIT to work with Gobind Khorana, again on membrane proteins.  At that time, the first sequence of a complex membrane protein had been completed – bacteriorhodopsin.  So that was a very exciting time, opening up a completely new area of research.  And when I took a faculty position I continued to work on membrane proteins.

When you made the first nanopore sensor, did you imagine its amazing potential?

Well, I like to distinguish between the imaginary and the real.  Of course, it’s valuable to have imagination as a driving force, but putting imagination into practice is the challenging part of science, and that took many many years.  What led to sequencing was an evolution – there wasn’t a eureka moment when I thought oh my gosh we can sequence DNA this way.  It looked like a strong possibility, based on our work on single-molecule detection with nanopores, but we had to work out how to actually do it.

How is it done?  Can you explain in simple terms how nanopore sequencing works?

You start with a protein pore: these occur in nature, but you have to modify them genetically or chemically to get them to do what you want them to do. You put a single copy of a pore into a membrane, and if you apply a voltage across it, you can measure the current that flows through the pore. This current is not carried by electrons as it would be in an electrical circuit, it is carried by ions, so we call it an ionic current. The current is tiny compared to the current going through, say, a light bulb, but it can be measured.  If something happens inside the pore, that current will change. The pore is chosen so that its diameter is a couple of nanometres across, around the size of the kind of molecules that you would handle in organic chemistry, and about the diameter of most biological polymers. So when a polymer passes through the pore, it will modulate the ionic current. And in the case of DNA, the polymer chain carries four bases – G, A, T, and C – arranged in a linear sequence. The idea is that you can read off the sequence (of bases) as the DNA is transported through the pore.  Next it was a matter of getting the polymer to move through the pore at a speed that would allow the changes in ionic current to reflect the order of the different bases as they moved past a 'reading head' in the pore. That, simply put, is the basis of nanopore sequencing. Of course, the venture was easier said than done and after the essentials were demonstrated in academia, the company took on the demanding task of building a practicable device. Along the way, they achieved extraordinary portability and the ability to read very long DNA sequences.

What made you decide to set up Oxford Nanopore?

We knew that we had an incredibly sensitive technique that could detect individual molecules and we felt that this just had to be useful in many areas, including medicine, forensics and agriculture.  We started Oxford Nanopore well before we had a commercialisable product.  Graham Richards, the former chair of the Department, was a big player in that he enthusiastically encouraged academics to commercialise their research, and he put mechanisms in place whereby they could do that – raise the money they needed, find key employees and so on.  At that time there was a great deal of so-called ‘patient capital’ available – investors who would put their money into companies for 5 or 10 years rather than wanting to get a quick return.  Consequently, Oxford Nanopore was able to complete the R&D that turned the basic science into an actual product- the MinION sequencer.

You started the company in 2005.  Did you have to learn a lot of business skills?

I’m now 70 years old and I am still learning science, never mind business skills!  We learned a lot on the job, and many things, both in science and business were new, so you couldn’t read about them in a book and follow a formula.  We had help from IP Group, a company that Graham Richards had fostered – they helped us set up the company, and they were also a seed investor.  It was highly advantageous to be in Oxford because here there were formidable role models like Graham Richards, and investors like David Norwood - an exceptionally creative fundraiser.  The company was indeed made by Oxford people.  I founded the company, Spike Willcocks led from the business side and later joined the company, and Gordon Sanghera became the dazzling CEO.

We learned on the job.  Things were less formal in those days, and we could get ready access to investors to explain our plans.  Nonetheless, the first lesson I learned was that investors were much less interested in what we wanted to do than in who we were.  The investors were looking for energetic, creative people who wouldn’t give up, because they realised that most companies end up going in directions that differ from the initial plan. They were looking a lot more carefully at the people involved than we realised at the time!  We were three very different characters:  I have always been committed to academic science, Gordon had combined science and business to develop glucose detection at Medisense and Abbott, and Spike had been involved in starting numerous spinouts at IP Group.  But all three of us were fundamentally scientists; the company was science-led.  Of course, times are different now – Nanopore is a big company with its own HR department and so on – but in the early days, almost all the people we took on were scientists.

Are you still closely involved with the company?

Not really.  I still do research in that area; we’re now interested in analysing proteins rather than DNA and RNA, and I have a research grant from Nanopore and interact with them on the science level. But I went off the board about 5 years ago after serving for 10 years. It’s a large operation now and very different, with over 700 people.

Is the basic science behind Nanopore complete from your point of view?

I think so, but I would add that academic scientists often think something’s done when isn’t.  You can achieve a goal at an academic level, but to introduce it into practice requires a huge amount of work and ingenuity. Oxford Nanopore advanced rather primitive research into a really amazing technology. And they’re still improving that technology. This could not have been done in an academic environment – for one, it just requires too many people and too much money. Oxford Nanopore's MinION, a tiny instrument, which is simple to operate, is an astonishing achievement.

You will no doubt be a role model for young scientists who hope to achieve something of the success that you have.  What advice would you give them?

For me, it is the science that has been important.  I’m a passionate believer in basic research.  Amazing advances like stem cells, DNA sequencing, genome editing, monoclonal antibodies, MRI and so on – all these came from basic research at universities.  So if a person is good at research, I would urge them to keep on doing it!  I try to encourage the obviously talented young people to stay in basic science.  It’s not easy – they’re paid less, and there are all manner of trials and tribulations that make life hard from day to day. To persist in basic research you have to be pretty resilient – but the thrill of doing basic science has certainly never left me.

What’s next for you?

I certainly intend to keep going for another 4 or 5 years. We’re working now on tissue engineering – using 3D printing to make biological tissues, which is an exciting cutting-edge endeavour.  I don’t really see myself doing anything else, and suspect that if I did, I would become equally single-minded and dedicated to it.  Of course, I do have the occasional bad day, but I always come in the day after!

What are your thoughts about the scientific landscape and how would you change things for the future?

Science is demonstrably beneficial to the world, and I would put far greater resources into it.   We could readily double the money available to basic science. Another issue is the pressure for short term returns by the various funding agencies; it is not helpful if research gets diverted by people seeking immediate commercial success.  Leave the basic scientists alone and give them time, and rarely, they’ll come up with something amazing. You can’t expect that every scientist will do that, but you might get one in 1000 every 20 years who will come up with something truly remarkable.  All the advances I mentioned earlier - monoclonal antibodies, DNA sequencing, stem cells, and so on - they were often unplanned, they came from clever people who had freedom to operate and a reasonable amount of funding to get their work done.

Of course, we have to face the fact that top level science is very competitive, and I don’t think I would change that, but I would make it easier for talented young people in research to be well-funded at an early age.  We must find ways of attracting the very best young people into science, and in that regard we should keep our borders open. Certainly, the people in my lab are from all over the world.  On the whole though, there’s not much I would change. In the end, it is a privilege to have the resources for fundamental research.  You should be grateful for what you have and get on with it.  If you do something worthwhile, it will come to people’s attention.