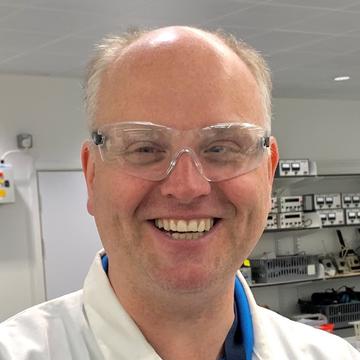 As the Director of the Chemistry Teaching Laboratories (CTL), one of my most important roles is to oversee the development of a curriculum that enables students to transition successfully from being school pupils, with varying amounts of practical exposure, into fledging researchers, with the skills to complete a year-long Part II research project. There are approximately 80 different research groups within which students may choose to undertake their research year, and the practical course must, therefore, cover the necessary breadth and depth of chemistry to ensure that students gain the greatest possible level of understanding.

Reflecting the nature of scientific research, our practical course is interdisciplinary by design, covering not just the traditional subdivisions of IOP, but also biological, computational and mathematical strands. This innovative approach was recognised by the University with a Vice-Chancellor Award in 2020. Our course, by recognising a distinction between key skills and techniques, and the underlying theory, gives students the opportunity to build confidence in their practical abilities before they are required to apply them, thereby reducing student stress levels, and encouraging the development of a deeper understanding of the chemistry involved.

Universities have a responsibility to help increase social mobility, and address educational disadvantage, through initiatives which aim to widen participation. In conjunction with the Department’s Educational Outreach Officer, Saskia O’Sullivan, the CTL team has developed an extensive outreach programme to address this goal. Overseeing the ongoing improvement, development, and delivery of this important programme, is a key aspect of my post.

Aside from my Departmental role, I am also a college lecturer at St Hugh’s College (2001-present).

My key interest is in the field of chemical education; how someone learns chemistry is a fascinating topic. The CTL group spend our time looking into three key areas: development of undergraduate practical resources and the role of practical teaching in a chemistry (related) degree, why certain chemistry topics are difficult to understand (troublesome knowledge), and development of outreach resources.

Since I spend most of my time teaching practical chemistry the majority of my research is concerned with finding innovative ways of developing students’ practical skills, whether by developing new practical sessions for the lab course (see publications and https://www.ctl.ox.ac.uk/teaching-fundamental-lab-skills-in-a-blended-mode) or new teaching practices (https://twitter.com/avadanutei/status/1234810774100553730, https://www.rsc.org/news-events/articles/2020/mar/rscposter-winners/ ).

We have also looked into developing a new way of teaching practical chemistry where key skills are taught first before then using these skills to carry out a practical investigation. We have spoken at/hosted numerous education conferences about this work and this ideology has now started to be seen in the educational literature.

The COVID pandemic has been an ‘interesting’ time for practical teaching and to develop ways to encourage collaboration within the chemistry community, we set up the #drylab20 forum: contact-for-dry-labs-group.pdf (rsc.org); #Drylabs20: A new global collaborative network to consider and address the challenges of laboratory teaching with the challenges of Covid-19 — COVID-19 Research Collaborations (elsevierpure.com)

How to teach difficult concepts in chemistry

Given that the members of the group have such a diverse range of interests in the field of science, we have investigated many areas of chemistry that students find challenging, and are often gateways to furthering their education (known as threshold concepts). Two main areas we have been researching are the application of 3-D thinking and acid/base chemistry; more detail is given below.

1)    The way an individual visualises molecules affects their development as a chemist, particularly when it comes to understanding reaction mechanisms. There are clear links to issues of spatial awareness which plays a fundamental part in a person’s understanding of reaction mechanisms.  Some of the work developed so far can be found at https://www.ctl.ox.ac.uk/virtual-reality-app-developed-by-oxford-chemist....

2)    People are exposed to acids throughout everyday life, for example citric acid, battery acid, hydrochloric acid etc., yet the same is not true for bases. We are investigating the importance of language in student understanding of bases and basic behaviour.

Each year the group has at least one Part II student who is working on developing Outreach resources. Once these have been created they are then added to our portfolio (see our Schools' pages)

After completing a final year project in carbohydrate chemistry, as part of my undergraduate degree in Medicinal Chemistry at the University of Dundee, I undertook a PhD investigating the synthesis of nodulation factors. This was followed by post-doctoral research at the University of St. Andrews, the University of Arkansas (Little Rock) and finally, at Newcastle University, before I joined the Department of Chemistry at Oxford in May 2001, as the Teaching Co-ordinator (Organic), running the organic teaching labs.

Over the next few years, I focused on developing my teaching skills.  In 2004, I gained a Postgraduate Diploma in Teaching and Learning in Higher Education (PgDipTLHE, Oxford) and, having received two teaching awards (2006 & 2008) from the University of Oxford, I was awarded a Fellowship of the Higher Education Academy (FHEA) in 2008. The funds generated from the teaching awards allowed work to begin on developing a holistic practical chemistry course. Initial findings were presented at the Science Learning and teaching conference at the University of Keele, and, in conjunction with Dr Hugh Cartwright, I was award a grant from the Oxford Centre of Excellence in Teaching Fund in 2009 to fund a post-doctoral researcher to continue this important work.

At the same time as the research into practical teaching at the undergraduate level was taking off, I also discovered how important Outreach work was to me. In the summer of 2001, I worked on the Sutton Trust summer school programme. Whilst this was rewarding to all those involved, I felt the Department could offer so much more to local schools. Alongside Dr Fabrice Birembaut, I initiated the creation of the MPLS Outreach officers' forum to help departments communicate with each other and I became actively involved with the Oxford Widening Participation Team, providing academic input into many new projects like the UNIQ course, MPLS Christmas Lectures (Oxford University Christmas Science Lectures - Chemistry Show) and “Murder in the Cloisters”, an event for young carers. The success of these schemes, alongside other local and national interventions, led to an increase in the diversity of students studying chemistry at Oxford. However, it become clear that many of these people struggled with ‘fitting in’ once they arrived at University, which led to the development of the Chemistry Bridging Course. This work was presented at VICE 2010 at Loughborough University, before developing into the MPLS Bridging Course, which has further evolved into the Opportunity Oxford scheme.

In recognition of this body of work in the field, I was asked to sit on the RSC Schools and Colleges panel, before being elected onto the RSC Educational Divisional Council where I served as a member for two 3-year terms (2011-2017). Following this, I was elected onto the RSC Tertiary Education group of which I am currently a member (2017-present).

I was the scientific expert for the Usborne ‘Lift The Flap periodic table’ book, which is a book introducing the periodic table to 7-10 year old children, and also a transition-to-university book, co-authored with Dr Fabrice Birembaut and Dr Mike Clugston, which will be published in August 2021.