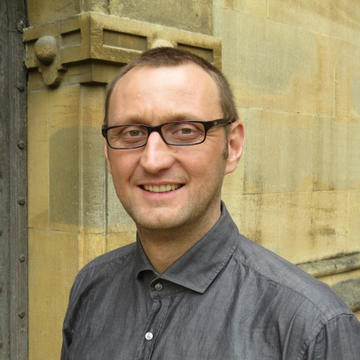 Handling large and complex molecules and investigating their structure in relation to their properties on the single molecule level with, ideally, atomic resolution is the main goal of my research. My work thus combines aspects of surface science, high resolution single molecule microscopy, and mass spectrometry with questions and application ranging from biology to quantum nanoscience.

The central tool of my research is Electrospray Ion Beam Deposition, a preparative mass spectroscopy method which allows the full control of a molecular ion beam in terms of chemical composition and energy for even the largest macromolecular ions reaching the Mega-Dalton range. This method allows us to prepare samples for high performance microscopy and perform novel hyperthermal chemistry.

Investigation of Molecular Structure and Function

ES-IBD was initially developed to enable atomically resolved scanning probe microscopy (SPM) of non-volatile molecules, which were excluded from vacuum-based analytical methods, which need clean sample preparation from the gas phase. This development has been very successful and we currently investigate the structure of molecules by SPM and have also branched out into other imaging methods: electron microscopy (EM) and low-energy electron holography (LEEH).

(2) Function coatings based on synthetic organic and biological molecules. Functional organic molecules such as sensitiser dyes for solar cells or molecular magnets can be handled with great care to isolate intact adsorbed species. We can probe their structure in relation to properties such as electronic band structure or magnetic excitations.

ES-IBD has the capacity to control charge state and kinetic energy of the gas phase molecular ions in the hyperthermal range (1eV-100eV), and through this the chemical interaction with the surface upon collision which can be used to trigger chemical reactions that wouldn’t occur under thermal conditions. This new way of hyperthermal mechano-chemistry takes place away from thermal equilibrium conditions and hence offers the possibility to create substances that cannot be found in equilibrium conditions.

Mechanism. Taking place at hyperthermal energy, the collision process is very fast, leading to large deformations which drive the reactions. We investigate the mechanism by studying the outcome of a reaction with microscopy and the dynamics with simulations.

Large molecules. Large molecules like proteins have a large number of degrees of freedom and hence will distribute energy upon collision differently than small molecules. It is of greatest importance to study these collisions, since deformations are crucial to biological functions.

Many of the methods employed by the group are unique and not commercially available. An important aspect of my research is therefore the development of new methods for the investigation of large molecules, always in the context of using ES-IBD as a tool to handle the molecule with highest precision to enable investigation at the single molecule level or with atomic resolution.

We are further developing the ES-IBD method as a whole and promote its use in the community. Key directions are:
- Providing high intensity ion beams for efficient deposition.- Characterisation and controlling over the molecular conformation at all points in the ES-IBD process, that is in the electrospray ionisation, during the flight of the molecule, and upon landing and sample handling and transfer.

On central application of molecular ion beam deposition is molecular imaging. For large molecules such as proteins, this is preferably done by cryo-EM. With collaboration partners in industry, we are developing methods and modified commercial instrumentation, which allows for the EM-imaging of proteins after controlled deposition (including mass-selection) of proteins.

In-line holographic microscopy of large molecules such as proteins with coherent, low electron electrons emitted from an electron point source is still in its infancy. It has recently been enabled by using electron-transparent freestanding graphene as substrate and gently depositing native proteins by means of ES-IBD.

We are developing this method working on instrumentation design as well as developing numerical simulations and reconstruction software. We support our collaborators in data analysis and aim for implementing a holography microscope linked to our native ES-IBD instrument.

Stephan Rauschenbach is an Associate Professor in Physical Chemistry at the University of Oxford. He is the head of the ion beam deposition lab where he develops novel instrumentation for single molecule imaging of large and complex molecules. He is a tutorial fellow at Wadham College, where he tutors students in Physical Chemistry.

Before joining the University of Oxford in 2017, he was group leader the Max Planck Institute for Solid State Research in Stuttgart, where he pioneered the electrospray ion beam deposition (ES-IBD) method and applied it for imaging of single molecules in scanning probe microscopy as well as in electron microscopy.

For this work he received the Mattauch-Herzog Award of the German Society of Mass Spectrometry in 2017. During his PhD, he was a fellow of the Hans-L.-Merkle foundation for Excellence in Science. He received his Dr.sc. in Physics from the École Polytechnique Fédérale de Lausanne. Earlier stations include the TU Munich, University of Augsburg, Siemens AG/Infineon, and the Sony Fusion Domain Lab in Tokyo.